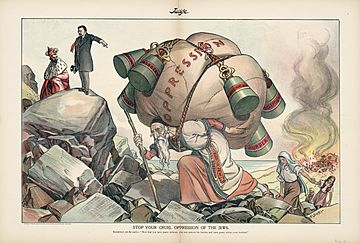 Oppression comes from the concept of being weighted down, and is often shown as such. This cartoon from 1904 shows Jewish laborers oppressed by the Russian Tsar

Oppression is when a person or group of people who have power use it in a way that is not fair, unjust or cruel. It can also describe the feeling of people who are oppressed. Oppressive governments can lead to a rebellion.

Racism, sexism and other prejudices can cause oppression, especially if laws are made based on them.

Anarchists say that government, the police and laws are oppressive. This is because they stop people from doing whatever they want to.

The Universal Declaration of Human Rights, and the idea of human rights in general, is meant to stop oppression.

All content from Kiddle encyclopedia articles (including the article images and facts) can be freely used under Attribution-ShareAlike license, unless stated otherwise. Cite this article:
Oppression Facts for Kids. Kiddle Encyclopedia.