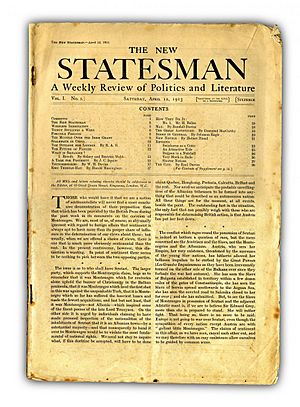 The New Statesman is a British left-wing political magazine that is published weekly in London.

The New Statesman was founded in 1913 with the support of George Bernard Shaw and other prominent members of the Fabian Society.

In 1930 the Statesman merged with the Liberal weekly the Nation, and changed its name to the New Statesman and Nation, which it remained until 1964. The chairman of the Nation's board was the economist John Maynard Keynes, who came to be an important influence on the paper.

During the 1930s, the Statesman moved to the left politically. It became strongly anti-fascist and was generally critical of the government policy of appeasement of Mussolini and Hitler.

All content from Kiddle encyclopedia articles (including the article images and facts) can be freely used under Attribution-ShareAlike license, unless stated otherwise. Cite this article:
New Statesman Facts for Kids. Kiddle Encyclopedia.