John Maynard Keynes, 1st Baron Keynes, CB (5 June 1883 – 21 April 1946) was a British economist. His ideas, called Keynesian economics, had a big impact on modern economic and political theory. His ideas also had a big impact on many governments' tax and economic policies. He said governments should use tax and banking measures to stop the effects of economic recessions, depressions and booms. He is one of the fathers of modern theoretical macroeconomics. 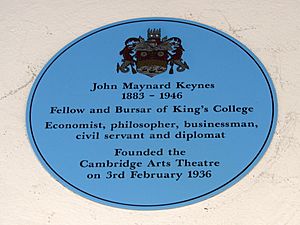 Keynes first went to King’s College, Cambridge, in 1902. At first he studied mathematics. Later he studied economics under A.C. Pigou and Alfred Marshall. People think Professor Marshall prompted Keynes to change his studies from mathematics and classics to economics. Keynes received his B.A. in 1905 and his M.A. in 1908.

In 1918, he met Lydia Lopokova, a well-known Russian ballerina. Keynes and Lopokova married in 1925.

Keynes was a successful investor and he built up a big fortune. He nearly lost all of his money after the Stock Market Crash of 1929. Later he re-built his fortune. He enjoyed collecting books: for example, he collected and protected many of Isaac Newton's papers.

Lord Bertrand Russell said Keynes was the most intelligent person he had ever known. Lord Russell said: "Every time I argued with Keynes, I felt that I took my life in my hands, and I seldom emerged without feeling something of a fool." 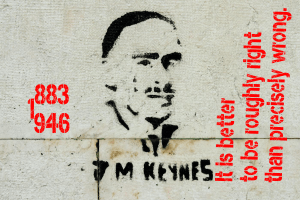 It is better to be roughly right than precisely wrong. John Maynard Keynes, 1883-1946

Keynes accepted a lectureship at Cambridge in economics funded personally by Alfred Marshall. Soon he was appointed to the Royal Commission on Indian Currency and Finance, where he was able to put economic theory into practice.

During World War I he worked for the Adviser to the Chancellor of the Exchequer and to the Treasury on Financial and Economic Questions.

Keynes also attended the Conference on the Versailles Treaty to end World War I. He wrote The Economic Consequences of the Peace in 1919, and A Revision of the Treaty in 1922. In his books he said that the reparations which Germany was being made to pay would ruin the German economy and would lead to further fighting in Europe. These predictions were shown to be true when the German economy suffered in the hyperinflation of 1923. Reparations were only completed in 2010.

Keynes's magnum opus (Latin for "Great Work", meaning his most famous book) was the General Theory of Employment, Interest and Money. The General Theory was published in 1936. The ideas in that book were very different from classical economics.

Historians agree that Keynes influenced U.S. president Roosevelt's New Deal. Spending more the government earned in taxes (called deficit spending) was used in the New Deal from 1938. But the idea had been agreed to by President Herbert Hoover. Few senior economists in the U.S. agreed with Keynes in the 1930s. With time, however, his ideas became more widely accepted.

During World War II, Keynes wrote a book titled How to Pay for the War. He said the war effort should be paid for by higher taxes. He did not like deficit spending because he wanted to avoid inflation.

Throughout his life, Keynes worked energetically for the benefit both of the public and his friends; even when his health was poor, he laboured to sort out the finances of his old college. Helping to set up the Bretton Woods system, he worked to institute an international monetary system that would be beneficial for the world economy.

Keynes suffered a series of heart attacks, which ultimately proved fatal. They began during negotiations for the Anglo-American loan in Savannah, Georgia, where he was trying to secure favourable terms for the United Kingdom from the United States, a process he described as "absolute hell". A few weeks after returning from the United States, Keynes died of a heart attack at Tilton, his farmhouse home near Firle, East Sussex, England, on 21 April 1946, at the age of 62.

Against his wishes (he wanted for his ashes to be deposited in the crypt at King's), his ashes were scattered on the Downs above Tilton. 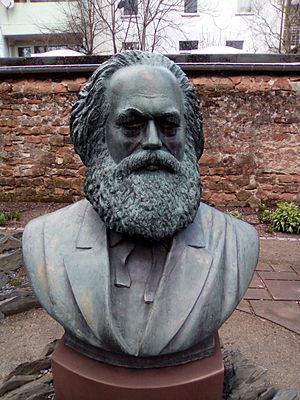 All content from Kiddle encyclopedia articles (including the article images and facts) can be freely used under Attribution-ShareAlike license, unless stated otherwise. Cite this article:
John Maynard Keynes Facts for Kids. Kiddle Encyclopedia.