An economist is someone who studies or has a job in economics. Economics is the study of how people make choices to satisfy their wants.

According to Frédéric Bastiat:

"There is only one difference between a bad economist and a good one: the bad economist confines himself to the visible effect; the good economist takes into account both the effect that can be seen and those effects that must be foreseen." 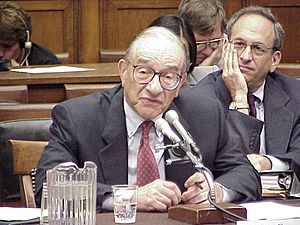 Economists work in many fields including academia, government and in the private sector, where they may also "...study data and statistics in order to spot trends in economic activity, economic confidence levels, and consumer attitudes. They assess this information using advanced methods in statistical analysis, mathematics, computer programming [and] they make recommendations about ways to improve the efficiency of a system or take advantage of trends as they begin."

In contrast to regulated professions such as engineering, law or medicine, there is not a legally required educational requirement or license for economists. In academia, to be called an economist requires a Ph.D. degree in Economics. In the US government, on the other hand, a person can be hired as an economist provided that they have a degree that included or was supplemented by 21 semester hours in economics and three hours in statistics, accounting, or calculus.

A professional working inside of one of many fields of economics or having an academic degree in this subject is often considered to be an economist. In addition to government and academia, economists are also employed in banking, finance, accountancy, commerce, marketing, business administration, lobbying and non- or not-for profit organizations.

All content from Kiddle encyclopedia articles (including the article images and facts) can be freely used under Attribution-ShareAlike license, unless stated otherwise. Cite this article:
Economist Facts for Kids. Kiddle Encyclopedia.