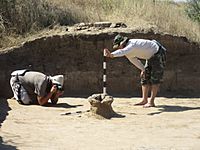 Archaeology is one of the social sciences.

The social sciences are a group of academic disciplines that study human aspects of the world. Social Sciences includes anthropology, archaeology, economics, geography, political science, psychology, and sociology. They are different from the arts and humanities as for them scientific method is important. Most of the social sciences require doing a lot of research, such as making surveys. Such research is called "social research". Some subjects, such as history, are sometimes social sciences and sometimes humanities.

The term "social sciences" has been used for over 200 years and mostly originates from a thinker named Auguste Comte. Many of the fields of social science have come about since then. In America, much of the thought and practice of social science came from the University of Chicago and other universities.

All content from Kiddle encyclopedia articles (including the article images and facts) can be freely used under Attribution-ShareAlike license, unless stated otherwise. Cite this article:
Social science Facts for Kids. Kiddle Encyclopedia.