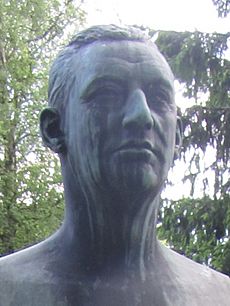 Ragnar Frisch's father, Anton Frisch (1865–1928), goldsmith in Oslo, and a member of the Frisch family of silver miners and goldsmith

Ragnar Anton Kittil Frisch (3 March 1895 – 31 January 1973) was an Norwegian economist. He won the first Nobel Prize in Economics with Jan Tinbergen in 1969.

Frisch was born on 3 March 1895 in Christiania, Norway. He studied at the University of Oslo.

He was also the co-winner with Jan Tinbergen of the first Nobel Prize in Economics in 1969 for his works with econometrics.

He is known for having founded the discipline of econometrics, and in 1933 to have created the widely used term pair macroeconomics/microeconomics.

Frisch was married to Marie Smedal from 1920 until her death in 1952. Then he was remarried to Astrid Johannessen from 1953 until his death in 1973. Frisch had one daughter with Smedal.

All content from Kiddle encyclopedia articles (including the article images and facts) can be freely used under Attribution-ShareAlike license, unless stated otherwise. Cite this article:
Ragnar Frisch Facts for Kids. Kiddle Encyclopedia.