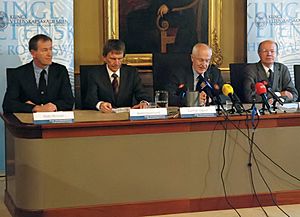 Announcement of the Nobel Memorial Prize in Economic Sciences 2008

The Sveriges Riksbank Prize in Economic Sciences in Memory of Alfred Nobel, informally called the Nobel Prize in Economics, is a prize awarded each year for outstanding contributions in the field of economics. The prize was not one of the awards set out in the will of Alfred Nobel. The winners of the prize receive their diploma and gold medal from the Swedish monarch at the same December 10 ceremony in Stockholm as the Nobel laureates in physics, chemistry, physiology or medicine, and literature. The amount of money awarded to the economics laureates is also equal to that of the other prizes.

All content from Kiddle encyclopedia articles (including the article images and facts) can be freely used under Attribution-ShareAlike license, unless stated otherwise. Cite this article:
Nobel Prize in Economics Facts for Kids. Kiddle Encyclopedia.