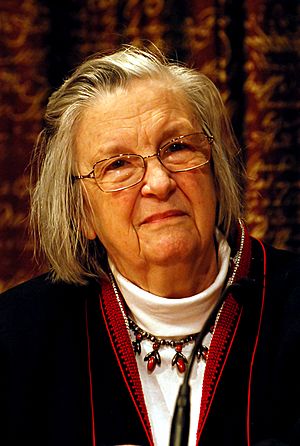 Elinor Claire "Lin" Ostrom (née Awan; August 7, 1933 – June 12, 2012) was an American scientist. She was born in Los Angeles, California. She taught at both Indiana University and Arizona State University. She won the Nobel Prize 2009 in Economic Sciences which she had to share with Oliver Williamson. Ostrom became the first woman to win a Nobel Prize in this category. She was influenced by James M. Buchanan.

Ostrom was one of 20 Nobel Laureates who signed the "Stockholm memorandum" at the 3rd Nobel Laureate Symposium on Global Sustainability in Stockholm, Sweden on 18 May 2011.

She was married to political scientist Vincent Ostrom (born 1919) from 1963 until she died. She was diagnosed with pancreatic cancer in October 2011 and died of the disease in Bloomington, Indiana at age 78.

All content from Kiddle encyclopedia articles (including the article images and facts) can be freely used under Attribution-ShareAlike license, unless stated otherwise. Cite this article:
Elinor Ostrom Facts for Kids. Kiddle Encyclopedia.