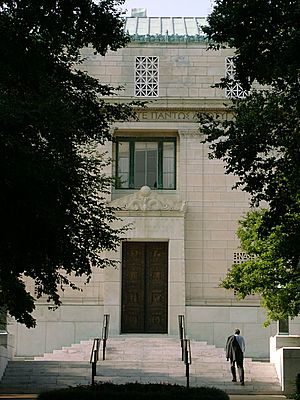 National Academy of Sciences (NAS) is United States corporation whose members serve as advisers to the nation on science. New members of the organization are elected annually by current members, based on their distinguished and continuing achievements in original research.

The NAS is running 21-month project which will study how humans might influence weather patterns, assess dangers and investigate possible national security implications of climate geoengineering attempts to mitigate global warming. The project is funded by the CIA, the National Oceanic and Atmospheric Administration, and NASA.

All content from Kiddle encyclopedia articles (including the article images and facts) can be freely used under Attribution-ShareAlike license, unless stated otherwise. Cite this article:
National Academy of Sciences Facts for Kids. Kiddle Encyclopedia.