Othniel Charles Marsh M.A PhD LL.D (October 29, 1831 – March 18, 1899) was one of the leading paleontologists of the 19th century. He discovered and named many fossils found in western North America.

Marsh was born in Lockport, New York, into a family of modest means. However, he was the nephew of the very rich banker and philanthropist, George Peabody.

He graduated from Yale College in 1860. He later studied geology and mineralogy in New Haven, and afterwards paleontology and anatomy in Berlin, Heidelberg and Breslau. He returned to the United States in 1866 and was appointed professor of vertebrate paleontology at Yale University. He persuaded his uncle George Peabody to establish the Peabody Museum of Natural History at Yale. 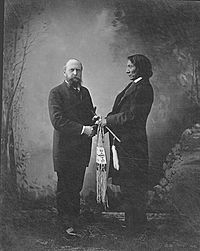 Marsh and his many fossil hunters were able to uncover about 500 new species of fossil animals, which were named by Marsh himself.

In May 1871, Marsh uncovered the first pterosaur fossils found in America. He also found early horses, the Cretaceous and Jurassic dinosaurs Apatosaurus and Allosaurus, and described the toothed birds of the Cretaceous; Ichthyornis and Hesperornis.

All content from Kiddle encyclopedia articles (including the article images and facts) can be freely used under Attribution-ShareAlike license, unless stated otherwise. Cite this article:
Othniel Charles Marsh Facts for Kids. Kiddle Encyclopedia.