Ceratosaurus was a predatory dinosaur from the Upper Jurassic period, 156 to 145 million years ago. It had a large horn on its nose, and a pair of smaller horns in front of its eyes. Uniquely among theropods, Ceratosaurus had armor, in the form of small osteoderms running down the middle of its back.

Ceratosaurus lived alongside dinosaurs such as Allosaurus, Torvosaurus, Apatosaurus, Diplodocus, Stegosaurus and Camarasaurus. Ceratosaurus reached lengths of 6.7 m (22 ft), and weighed up to 980 kilograms (2,160 lb). It was smaller than the other large carnivores of its time (allosaurs and Torvosaurus) and likely occupied a distinctly separate niche from them. Ceratosaurus fossils are noticeably less common than those of Allosaurus, but whether this implies Ceratosaurus being rarer is uncertain (animals with certain lifestyles are more biased toward fossilization than others). Ceratosaurus had a longer, more flexible body, with a deep tail shaped like that of a crocodilian. This suggests that it was a better swimmer than the stiffer Allosaurus. A recent study by Robert Bakker suggested that Ceratosaurus generally hunted aquatic prey, such as fish and crocodiles, although it had potential for feeding on large dinosaurs. The study also suggests that sometimes adults and juveniles ate together. This evidence is debatable, and Ceratosaurus tooth marks are very common on large, terrestrial dinosaur prey fossils. Scavenging from corpses, smaller predators, and after larger ones also likely accounted for some of its diet.

Ceratosaurus, Allosaurus and Torvosaurus appear to have had different ecological niches, based on anatomy and the location of fossils. Ceratosaurus and Torvosaurus may have preferred to be active around waterways, and had lower, thinner bodies that would have given them an advantage in forest and underbrush terrains, whereas Allosaurus were more compact, with longer legs, faster but less maneuverable, and seem to have preferred dry floodplains. Ceratosaurus, better known than Torvosaurus, differed noticeably from Allosaurus in functional anatomy by having a taller, narrower skull with large, broad teeth. Allosaurus was itself a potential food item to other carnivores, as illustrated by an Allosaurus pubic foot marked by the teeth of another theropod, probably Ceratosaurus or Torvosaurus. The location of the bone in the body (along the bottom margin of the torso and partially shielded by the legs), and the fact that it was among the most massive in the skeleton, indicates that the Allosaurus was being scavenged. 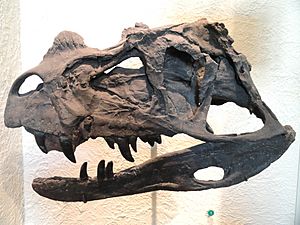 Marsh (1884) considered the nasal horn of Ceratosaurus to be a "most powerful weapon" for both offensive and defensive purposes, and Gilmore (1920) concurred with this analysis. However, this interpretation is now generally considered unlikely. Norman (1985) believed that the horn was "probably not for protection against other predators," but might instead have been used for intraspecific combat among male ceratosaurs contending for breeding rights. Paul (1988) suggested a similar function, and illustrated two Ceratosaurus engaged in a non-lethal butting contest. Rowe and Gauthier (1990) went further, suggesting that the nasal horn of Ceratosaurus was "probably used for display purposes alone" and played no role in physical confrontations. If used for display, it is likely that the horn would have been brightly colored.

All content from Kiddle encyclopedia articles (including the article images and facts) can be freely used under Attribution-ShareAlike license, unless stated otherwise. Cite this article:
Ceratosaurus Facts for Kids. Kiddle Encyclopedia.