Allosaurus was a large theropod dinosaur from the Jurassic period, a predatory carnivore. It was one of the largest predators of its time.

Allosaurus averaged 8.5 metres (28 ft) in length, though some remains suggest it could reach over 12 meters (39 ft). Its three-fingered forelimbs were smaller than its large hind legs, and the body was balanced by a long, heavy tail. It weighed up to 1.4 tons (3086 lbs).

It is the most common large predator found in the Morrison Formation of North America. This formation was laid down 155 to 145 million years ago, in the Jurassic. 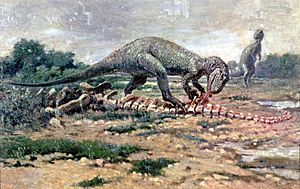 The Allosaurus was a large carnivorous dinosaur that walked on two legs and had two arms on the front of its body. Its arms were longer than those of the T.Rex with large claws. The skin was green or brown with fading red stripes on the back. This dinosaur could grow to be 12 meters long (39 feet) 5 meters tall (16.5 feet) and weigh up to about 1.4 tons (3086 lbs).

It had a very long head, 90 cm (3 ft), with 5 to 10 cm teeth. Allosaurus's teeth were thin and serrated not made to puncture bone but to strip bits of meat off a carcass.

The Allosaurus did not look like the other dinosaurs that existed at that time. Because of this, the word Allosaurus means "different lizard". The Allosaurus is in the theropod (meaning "beast foot") family. Allosaurus was bipedal. The top speed of Allosaurus has been estimated at 30 to 55 kilometers per hour (19 to 34 miles per hour). 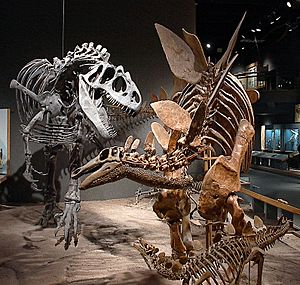 Allosaurus and Stegosaurus skeletons, Denver Museum of Nature and Science

Allosaurus were carnivorous dinosaurs and ate about 60 pounds a day. These animals hunted in small groups which allowed them to take down even the largest prey. In the same way as raptors would. They even ate the gigantic Apatosaurus (which used to be called Brontosaurus) even though the Apatosaurus was more than three times the size of an Allosaurus. They also likely hunted Stegosaurus, sauropods and ornithopods.

Young baby Allosaurus may eaten insects like dragonflies and centipedes, and other small animals, then around two years old, Allosaurus probably would have eaten small dinosaurs. 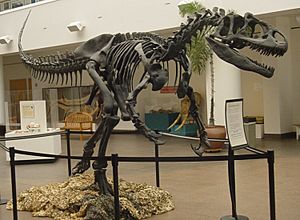 The first fossil of an Allosaurus to be discovered was found in the USA state of Colorado, in 1869. At first, the people who found it thought it was a petrified horse hoof instead of a dinosaur bone. In 1991 a complete Allosaurus skeleton was discovered. This Allosaurus was named "Big Al".

"Big Al" was made famous by a TV programme called The Ballad of Big Al also called Walking with Dinosaurs: Allosaurus. This program showed what Big Al's life could have been like.

They are also one of the most common dinosaurs in museums from the Jurassic time period.

The fossil site known as the Cleveland-Lloyd Dinosaur Quarry in Emery County, Utah was known in 1927, but major operations did not begin there until 1960. An effort from nearly 40 institutions found thousands of bones between 1960 and 1965.

Suggestions as to how so many fossils were found include animals getting stuck in a bog, to becoming trapped in deep mud and falling victim to drought. Regardless of the cause, the great quantity of well-preserved Allosaurus remains means the animal is one of the best-known theropods. Individuals of almost all ages and sizes are found. 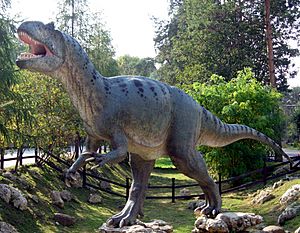 Allosaurus, like Tyrannosaurus, has come to represent the typical example the carnivorous dinosaur in popular culture.

It is a common dinosaur in museums. A number of museums cooperated in excavations at the Cleveland Lloyd Dinosaur Quarry. By 1976, museums in eight countries had Cleveland-Lloyd Allosaurus material or casts.

Allosaurus is top predator in both Arthur Conan Doyle's 1912 novel, The Lost World, and its 1925 film adaptation, the first full-length motion picture to feature dinosaurs.

Allosaurus appeared in the second episode of the 1999 BBC television series Walking with Dinosaurs and the follow-up special The Ballad of Big Al.

All content from Kiddle encyclopedia articles (including the article images and facts) can be freely used under Attribution-ShareAlike license, unless stated otherwise. Cite this article:
Allosaurus Facts for Kids. Kiddle Encyclopedia.