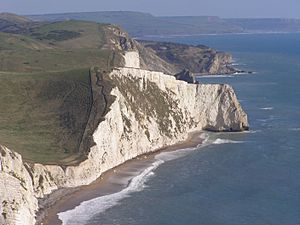 The Upper Jurassic is the last geological epoch in the Jurassic that began 163.5 million years ago (mya), and ended at 145 mya. It was followed by the Lower Cretaceous.

During the Upper Jurassic epoch, Pangaea broke up into two supercontinents, Laurasia to the north, and Gondwana to the south. The result of this break-up was the spawning of the Atlantic Ocean. However, at this time, the Atlantic Ocean was relatively narrow.

Sea level was high, though not so high as during the Upper Cretaceous. The Laurasian landmass was broken up by the rising sea into large islands. The rocks were carbonate limestones and clays. The epoch included the famous Solnhofen limestone lagerstätte, where Archaeopteryx was found.

The Upper Jurassic of England and Europe bears a huge amount of the products of life. The Kimmeridge clay is the main source for the huge North Sea oil reserves, and the whole epoch is stuffed full of marine fossils. Many dinosaur remains have also been found. The epoch starts with the Oxford Clay deposited in a shallow seaway of 10 to 50 metres depth.

The first fossils which show small dinosaurs with feathers are found: Anchiornis.

All content from Kiddle encyclopedia articles (including the article images and facts) can be freely used under Attribution-ShareAlike license, unless stated otherwise. Cite this article:
Upper Jurassic Facts for Kids. Kiddle Encyclopedia.