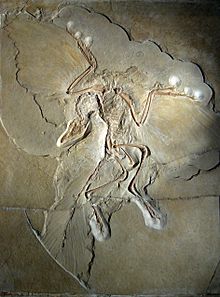 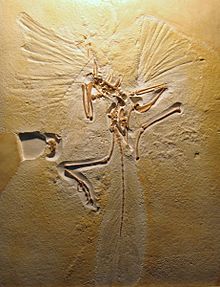 Archaeopteryx is one of the most important fossils ever discovered. It is a bird from the Upper Jurassic, about 150 million years ago. It shows the evolutionary link between non-avian theropod dinosaurs and birds. The first Archaeopteryx was found in 1860 near Solnhofen in Bavaria, Germany. Today, ten skeletons and one feather of Archaeopteryx have been found.

Archaeopteryx looked like a small carnivorous dinosaur with wings and feathers. It had a mouth with teeth, claws on the hands and a long tail. Today, it is known that dromaeosaurs, and possibly most theropods, looked like birds and that many had feathers. When they are born, today's South American hoatzin have claws on their wings when they are young, just like Archaeopteryx.

Only one dinobird has been found from a time before Archaeopteryx. It is called Anchiornis huxlei, from 160 to 155 million years ago. It had feathers on both front and rear legs, and could certainly glide. It may or may not have had some ability to fly. This discovery means we cannot say Archaeopteryx is the first known bird, but its contribution to science has been huge. We now know for sure that a whole group of small theropod dinosaurs had feathers, and that flight was a later, secondary, use of feathers. The first use of feathers was temperature regulation, and probably also signalling (see Epidexipteryx).

Directly ancestral or not?

It may be that Archaeopteryx is not directly ancestral to all birds, but it is still a fine transitional fossil.

"Archaeopteryx, for example, is not necessarily directly ancestral to birds. It may have been a species on a side-branch. However, that in no way disqualifies it as a transitional form, or as evidence for evolution. Evolution predicts that such fossils will exist, and if there was no link between reptiles and birds then Archaeopteryx would not exist, whether it is directly ancestral or not".

All content from Kiddle encyclopedia articles (including the article images and facts) can be freely used under Attribution-ShareAlike license, unless stated otherwise. Cite this article:
Archaeopteryx Facts for Kids. Kiddle Encyclopedia.