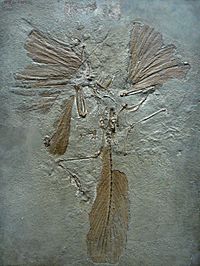 The London specimen of Archaeopteryx, discovered only two years after the publication of On the Origin of Species

Transitional fossils (or missing links) are the fossilised remains of lifeforms that show features typical of two distinct groups. It may be a rare fossil, such as Archaeopteryx, which shows early features of a group which later becomes widespread.

The rarity of transitional forms is interesting. It suggests the new forms are not yet dominant in the ecology of their time, and their populations are relatively small. It follows that their fossils would be scarce. In the Solnhofen limestone where Archaeopteryx was found, there are more examples of pterosaurs of several genera than there are of the proto-bird. In the Jurassic, the pterosaurs were dominant in the air.

But in the Lower Cretaceous the situation is reversed. The pterosaurs are in decline, and large numbers of different bird species are found in the famous Chinese lagerstatten deposits such as the Jehol biota. The Lower Cretaceous birds are clearly more bird-like, and the features they developed enabled them to invade habitat niches which had been the preserve of pterosaurs, or maybe were not previously exploited at all.

Typical of transitional fossils is that some features are clearly basal or primitive. Other features are advanced ('derived'). With Archaeopteryx, the front legs are derived, and show clearly the capacity for flight. Also, the feathers had the rachus (stem) off-centre, a feature of all bird flight feathers. The rest of the skeleton was just like any other small carnivorous dinosaur.p35

When transition takes place between one group and another, not all features change at the same time. This is called mosaic evolution.408 Transitions between higher groups would involve a series of transitional species, only a few of which may be found as fossils.

All content from Kiddle encyclopedia articles (including the article images and facts) can be freely used under Attribution-ShareAlike license, unless stated otherwise. Cite this article:
Transitional fossil Facts for Kids. Kiddle Encyclopedia.