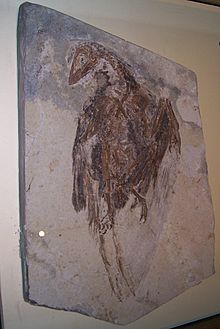 Confuciusornis from the Jehol biota

Jeholornis. This is a small theropod, not a bird.

The Jehol biota includes all the living organisms – the ecosystem – of northeastern China between 133 to 120 million years ago (mya). This is the Lower Cretaceous ecosystem which left fossils in the Yixian Formation, some 125–121 mya, and the Jiufotang Formation. It is also believed to have left fossils in the Sinuiju series of North Korea.

The ecosystem in the Lower Cretaceous was dominated by wetlands and numerous lakes (not rivers, deltas, or marine habitats). Rainfall was seasonal, alternating between semi-arid, and mesic conditions. The climate was temperate. The Jehol ecosystem was interrupted at times by ash eruptions from volcanoes to the west. The word Jehol was the name given during the Japanese occupation of North-East China, 1933–1946.

The Jehol biota is noteworthy for the many different fossils and the large numbers of individuals of each species that have been recovered.

The biota includes many species that were previously known only from the Upper Jurassic or earlier. These include the dinosaur Sinosauropteryx, and the pterosaur Dendrorhynchoides. There was even a primitive protomammal – a tritylodont therapsid – from Lower Cretaceous Japan. Tritylodonts were previously thought to have gone extinct in the Middle Jurassic. The biota also has the earliest and most basal (primitive) known members of groups which spread all around the world by the Upper Cretaceous, including neoceratopsians, therizinosaurs, tyrannosaurs, and oviraptors.

The Jehol biota has produced fossils of plant mega- and microfossils, including the earliest angiosperms, charophytes and dinocysts, snails (gastropods), clams (bivalves), superabundant aquatic arthropods called conchostracans, ostracods, shrimps, insects, spiders, fish, frogs and salamanders, turtles, choristoderes, lizards (squamata), pterosaurs, and dinosaurs including dinobirds, the largest mammals known from the Mesozoic, and a great diversity of birds including the earliest advanced birds, and the smallest and largest birds known from the Mesozoic.

The forests around the lakes were dominated by conifers including members of the podocarp pine, araucaria, and cypress families. There were also ginkgos, bennettitaleans, ephedra, horsetails, ferns, and mosses. The leaves and needles of the trees show adaptations to a dry season, but some of the ferns and mosses are types that grow in very wet habitats. It is possible that the latter avoided dry conditions by growing very close to bodies of water. Archaefructus has been described as the earliest known flowering plant (Angiosperm), and it is reconstructed as a water plant.

The fossils have been found in several sites of exceptional preservation. The two most famous are the Yixian and Jiufotang Formations. The Yixian and Jiufotang Formations are Lagerstatten, meaning that they have exceptionally good conditions for fossil preservation. The fossils are numerous, but also very well preserved. They often have articulated skeletons (bones connected), soft tissues, colour patterns, stomach contents, and twigs with leaves and flowers still attached.

Palaeontologists deduced two things from this. The first is that the land animals and plants were washed into the lakes very gently, or were already in the lakes when they died. They do not show the damage seen in fossils formed by large floods. Second, volcanic ash is commonly interbedded with lake sediments, and ashfalls seem to have quickly buried the fossilized organisms, created anoxic conditions around them, and prevented scavenging.

The biota probably extended as far as North Korea. Its earliest appearance may be in another Chinese lagerstätte, the Huajiying Formation.

A geological formation in Liaoning, N.E. China. It has outstanding preservation. The deposits of siliclastic (SiO2) sediment alternate with basalt. It was first recognised by the Japanese when they occupied Manchuria ('Jehol'). The formation was laid down 125–121 million years ago. It contains the famous Confuciusornis beds.

Sinodelphys, the earliest metatherian mammal, was found in this formation.

The Jiufotang Formation is a Lower Cretaceous geological formation in Liaoning. It has yielded fossils of feathered dinosaurs, primitive birds, pterosaurs, and other organisms.

All content from Kiddle encyclopedia articles (including the article images and facts) can be freely used under Attribution-ShareAlike license, unless stated otherwise. Cite this article:
Jehol biota Facts for Kids. Kiddle Encyclopedia.