Sinosauropteryx is a genus of non-avialan dinosaur (not a bird).

It is the first one found with the fossilized impressions of furry down or filamentous feathers. Overall, the filaments resemble the down-like feathers of some modern flightless birds.

Sinosauropteryx lived in China during the early Cretaceous period and was a close relative of Compsognathus. It has been dated to 124.6–122 million years ago.

The fossils were from the famous Jehol biota of Sihetun, Liaoning Province, China, and represent an ancient lake bed.

Most paleontologists do not consider Sinosauropteryx to be a bird, because phylogenetically, it lies far from the clade Aves, usually defined as Archaeopteryx plus modern birds.

Sinosauropteryx prima is among the smallest known non-avian theropods, with the type specimen (a nearly mature individual) measuring only 68 cm (27 in) in length, including a very long tail. 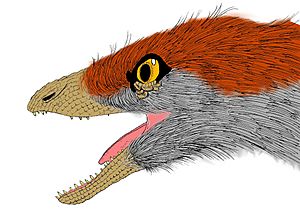 Restoration of the head

Paleontologist Nick Longrich suggested that these specimens preserve remnants of the original colour pattern the animal would have had in life. He argued that the dark, banded stains on the tail were too evenly spaced to have been caused by random separation of the fossil slabs, and that they represent fossilized pigments present in the feathers.

The presence of dark feathers along only the top of the body may also reflect the colour pattern in life, indicating that Sinosauropteryx prima was countershaded with dark colour on its back and lighter colour on its underside, with bands or stripes on the tail for camouflage. The main colour turned out later to be ginger.

All content from Kiddle encyclopedia articles (including the article images and facts) can be freely used under Attribution-ShareAlike license, unless stated otherwise. Cite this article:
Sinosauropteryx Facts for Kids. Kiddle Encyclopedia.