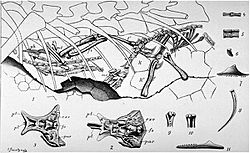 Compsognathus was a small carnivorous theropod dinosaur, from the end of the Jurassic period, 144 million years ago. It was about a metre long, and ran on two legs, using its long tail to keep its balance.

Compsognathus is known from two nearly complete specimens, one from Germany (89 cm 35 in long), and another from France (125 cm 49 in long). The German specimen was found in the Solnhofen limestone in Bavaria, over 150 years ago.

The larger French specimen (MNHN CNJ 79) was discovered in 1972 in the Portland limestone, near Nice in southeastern France. Although originally described as a separate species called Compsognathus corallestris, others have since renamed it as another example of Compsognathus longipes.

It is one of the few dinosaurs whose diet is known with certainty: the remains of small, agile lizards are preserved in the bellies of both specimens. Also it was once the smallest dino on earth but now that belongs to the Micropachycephalosaurus

Thomas Henry Huxley ("Darwin's bulldog"), who was a comparative anatomist, made a study of it nearly 150 years ago. He compared the first fossil bird, Archaeopteryx, with Compsognathus. These two fossils were found in the same rocks: Solnhofen limestone in Bavaria, Germany. The strata come from the end of the Jurassic, about 144 million years ago. Huxley showed that the two were almost identical, except for the front limbs and feathers of Archaeopteryx. He showed the basic affinity of birds and reptiles, which he united them under the title of Sauropsida. Huxley concluded that birds evolved from small carnivorous dinosaurs.

The remains of a lizard in the German specimen's thoracic cavity show that Compsognathus preyed on small vertebrates. Marsh, who examined the specimen in 1881, thought that this small skeleton inside Compsognathus belly was an embryo, but in 1903, Franz Nopcsa concluded that it was a lizard. Ostrom identified the remains as belonging to a lizard of the genus Bavarisaurus, which he concluded was a fast and agile runner owing to its long tail and limb proportions. This in turn led to the conclusion that its predators, Compsognathus, must have had sharp vision and the ability to rapidly accelerate and outrun the lizard. The Bavarisaurus is in a single piece, indicating that the Compsognathus must have swallowed its prey whole. The French specimen's gastric contents consist of unidentified lizards or sphenodontids.

All content from Kiddle encyclopedia articles (including the article images and facts) can be freely used under Attribution-ShareAlike license, unless stated otherwise. Cite this article:
Compsognathus Facts for Kids. Kiddle Encyclopedia.