Turtles are the reptile order Testudines. They have a special bony or cartilaginous shell developed from their ribs that acts as a shield.

The order Testudines includes both living and extinct species. The earliest fossil turtle comes from the early Upper Triassic of China, about 220 million years ago. So turtles are one of the oldest surviving reptile groups and a more ancient group than lizards, snakes and crocodiles.

Molecular evidence shows they are definitely archosauromorphs, the group of diapsid reptiles which also includes the dinosaurs.box 5.1, p123/4

Turtles have been very successful, and have almost world-wide distribution. But, of the many species alive today, some are highly endangered.

Although the word turtle is widely used to describe all members of the order Testudines, it is also common to see certain members described as terrapins, tortoises or sea turtles, as well. How these names are used, if at all, depends on the type of English.

To avoid confusion, the word "chelonian" is popular among some who work with these animals, as a catch-all name. Unfortunately, Chelonia is also the name of a particular genus of turtles, so this conflicts with its use for the entire order Testudines.

Although many turtles spend much of their lives underwater, all turtles and tortoises breathe air, and must surface at regular intervals to refill their lungs. Some spend their whole lives on dry land.

Aquatic respiration in Australian freshwater turtles is being studied. Some species have large cloacal cavities that are lined with many finger-like projections. These projections, called papillae, have a rich blood supply, and increase the surface area. The turtles can take up dissolved oxygen from the water using these papillae, in much the same way that fish use gills to respire.

Like other reptiles, turtles lay eggs which are slightly soft and leathery. The eggs of the largest species are spherical, while the eggs of the rest are elongated. Sea turtles lay their eggs on dry, sandy beaches. Turtles can take many years to reach breeding age, and in many cases breed every few years rather than annually.

In some species, there is temperature-dependent sex determination. Temperature determines whether an egg develops into a male or a female: a higher temperature causes a female, a lower temperature causes a male. Large numbers of eggs are deposited in holes dug into mud or sand. They are then covered and left to incubate by themselves. When the turtles hatch, they squirm their way to the surface and head toward the water. No turtle mother cares for its young.

Researchers have recently discovered a turtle’s organs do not gradually break down or become less efficient over time, unlike most other animals. It was found that the liver, lungs, and kidneys of a centenarian turtle are almost identical with that of its young counterpart. This has inspired genetic researchers to begin examining the turtle genome for longevity genes.

Turtles are divided into two groups, according to how they evolved a solution to the problem of withdrawing their necks into their shells. The Cryptodira (hidden neck) can draw their necks in while contracting it under their spine. The Pleurodira (side neck), now found only in fresh water environments in the Southern hemisphere, contract their necks to the side. So, the important adaptation of head withdrawing evolved twice from ancestral turtles which did not have this ability. 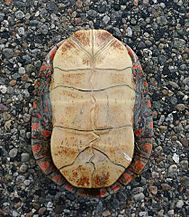 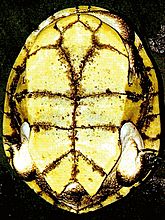 The upper shell of the turtle is called the carapace. The lower shell that encases the belly is called the plastron. The carapace and plastron are joined together on the turtle's sides by bony structures called bridges.

The largest chelonian is a marine turtle, the great leatherback sea turtle, which reaches a shell length of 200 cm (80 inches) and can reach a weight of over 900 kg (2,000 lb, or 1 short ton). Freshwater turtles are generally smaller, but with the largest species, the Asian softshell turtle Pelochelys cantorii, a few individuals have been reported to measure up to 200 cm or 80 in (Das, 1991). This dwarfs even the better-known alligator snapping turtle, the largest chelonian in North America, which attains a shell length of up to 80 cm (31½ in) and a weight of about 60 kg (170 lb).

The lagest fossil turtle, Archelon, was more than twice the length of the leatherback, at up to 4.5 metres.

Fossil of Proganochelys quenstedti, it is one of the oldest true turtles presently known. Unlike modern Testudines, Proganochelys was not able to hide its head under the shell. 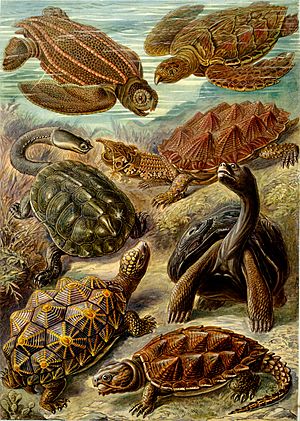 The first fossil proto-turtles come from Upper Triassic of the Mesozoic era, about 220 million years ago. Their shell evolved from bony extensions of their backbones and broad ribs that expanded and grew together to form a complete shell. It offered protection at every stage of its evolution, even when the bony component of the shell was not complete. This proved a long-lasting adaptation, and the group as a whole has survived many changes in the seas, and several extinction events.

Fossils of the freshwater Odontochelys semitestacea or "half-shelled turtle with teeth", from the later Triassic, have been found in southwest China. Odontochelys displays a complete bony plastron and an incomplete carapace, similar to an early stage of turtle embryonic development. By the Upper Jurassic, turtles had radiated widely, and their fossil history becomes easier to read.

Their exact ancestry has been a puzzle. Early amniotes had no openings in the skull behind the eyes. Openings developed in both Sauropsid and Synapsid skulls. They made the skull lighter, gave attachment points for muscles, and gave room for muscle bulges. But turtles do not have these skull openings. They were called 'anapsids', meaning 'no openings'.

Eventually it was suggested that turtles evolved from sauropsids which had skull openings, but turtles lost them as part of their evolution towards heavy defensive armour. All molecular studies have strongly upheld the placement of turtles within diapsids; some place turtles within Archosauria, or as a sister group to extant archosaurs.

The earliest known fully shelled turtles are the late Triassic Odontochelys, Chinlechelys and Proganochelys. The first-named genus was aquatic, but the second was probably terrestrial. They already had many advanced turtle traits, and thus probably had many millions of years of preceding turtle evolution and species in their ancestry. They did lack the ability to pull their heads into their shell (and they had a long neck), and (Odontochelys) had a long, spiked tail ending in a club, a body form similar to that of ankylosaurs, resulting from convergent evolution.

Turtles are divided into two living suborders, the Cryptodira and the Pleurodira. The Cryptodira is the larger of the two groups and includes all the marine turtles, the terrestrial tortoises, and many of the freshwater turtles. The Pleurodira are sometimes known as the side-necked turtles, a reference to the way they withdraw their heads into their shells. This smaller group mostly consists of freshwater turtles.

All content from Kiddle encyclopedia articles (including the article images and facts) can be freely used under Attribution-ShareAlike license, unless stated otherwise. Cite this article:
Turtle Facts for Kids. Kiddle Encyclopedia.