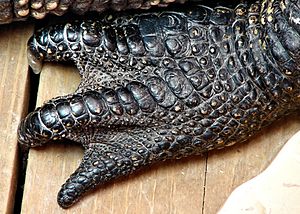 Scutes on an alligator foot

A scute is a bony external plate or scale, as on the shell of a turtle, the skin of crocodiles or the feet of some birds.

The dermal base may contain bone and produce dermal armour. Scutes with a bony base are properly called osteoderms. Dermal scutes are also found in the feet of birds and tails of some mammals, and are believed to be the primitive form of dermal armour in reptiles.

The term is also used to describe the heavy armour of the armadillo and the extinct glyptodon, and is occasionally used as an alternative to scales in describing snakes or certain fish, such as sturgeon.

All content from Kiddle encyclopedia articles (including the article images and facts) can be freely used under Attribution-ShareAlike license, unless stated otherwise. Cite this article:
Scute Facts for Kids. Kiddle Encyclopedia.