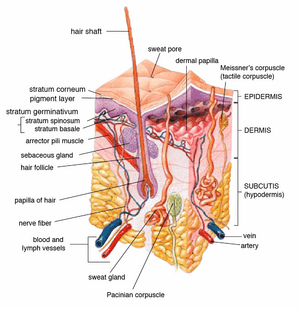 Cross-section of all skin layers

The epidermis is the skin or surface layer of an animal or plant. At its most basic, it is a sheet of cells. The cells are continually replaced by cell division (mitosis), and the layer (in animals) is sensitive to stimuli such as touch. In land vertebrates the epidermis has many layers; the outer layers may be reinforced by keratin.

The epidermis serves as a barrier to protect the body against microbial pathogens, oxidant stress (UV light) and chemical compounds and provides mechanical resistance. Most of that function is played by the stratum corneum.

Characteristics of the barrier

Factors that alter the barrier

The ability of the skin to hold water is primarily due to the stratum corneum and is critical for maintaining healthy skin. Lipids arranged through a gradient and in an organized manner between the cells of the stratum corneum form a barrier to transepidermal water loss.

The amount and distribution of melanin pigment in the epidermis is the main reason for variation in skin color in Homo sapiens. Melanin is found in the small melanosomes, particles formed in melanocytes from where they are transferred to the surrounding keratinocytes. The size, number, and arrangement of the melanosomes varies between racial groups, but while the number of melanocytes can vary between different body regions, their numbers remain the same in individual body regions in all human beings. In white and Asian skin the melanosomes are packed in "aggregates", but in black skin they are larger and distributed more evenly. The number of melanosomes in the keratinocytes increases with UV radiation exposure, while their distribution remain largely unaffected.

All content from Kiddle encyclopedia articles (including the article images and facts) can be freely used under Attribution-ShareAlike license, unless stated otherwise. Cite this article:
Epidermis Facts for Kids. Kiddle Encyclopedia.