Glyptodon came from South America. A related genus, Glyptotherium, first appeared in the south-west of the modern USA about 2.5 million years ago as a result of the Great American Interchange.

These herbivores (plant-eaters) would not have been vulnerable to the Sparassodont carnivores of the day. The native human population in their range is believed to have hunted them and used the shells for shelter in bad weather.

Glyptodon is part of the superorder of placental mammals known as Xenarthra. This clade of mammals also includes anteaters, tree sloths, armadillos, and extinct ground sloths and pampatheres. 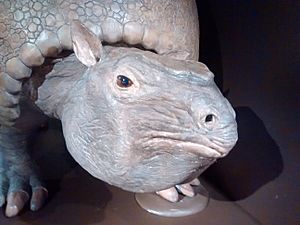 Glyptodon originated in South America. Their remains have been found in Brazil, Uruguay, and Argentina.

The environments range from forested areas, sub-forested, to warm and humid, while some have become accustomed to open, cold areas where grasslands are the most common.

During the Great American Interchange, a set of migrations that occurred after North and South America were connected by the rising of the volcanic Isthmus of Panama, Glyptodon migrated into Central America as far as Guatemala. A closely related genus, Glyptotherium, reached the southern region of the modern U.S. about 2.5 million years ago. 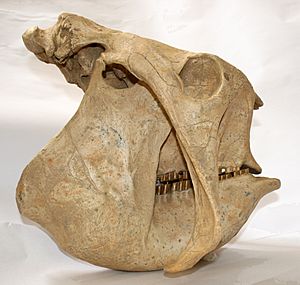 Skull in side view

Two main groups of glyptodonts can be distinguished by their feeding habits. Smaller-sized early Miocene propalaehoplophorids had narrow muzzles, while larger post-Miocene glyptodonts developed wider muzzles. The smaller glyptodonts were selective feeders, while the larger glyptodonts were bulk feeders. However, because of their body form and fusion of the cervical vertebrae, all members of Glyptodon would have needed to forage near the ground. 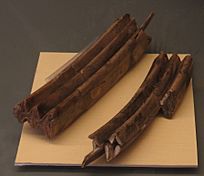 The feeding habits were herbivorous.

Like most other xenarthrans, glyptodonts had lower energy requirements than most other mammals. They could survive with lower intake rates than other herbivores with similar mass.

Glyptodon grazed near water sources such as rivers and lakes. Based on stable isotope analysis, it is evident that its diet consisted primarily of dicotyledonous trees and monocotyledonous grasses.

Glyptodonts are believed to have taken part in intraspecific fighting. Zoologists presume that since the tail of Glyptodon was very flexible and had rings of bony plates, it was used as a weapon in fights. Although its tail could be used for defense against predators, evidence suggests that the tail of Glyptodon was primarily for attacks on its own kind. Glyptodon likely fought each other to settle territorial or mating disputes, much like male-to-male fighting among deer using their antlers. 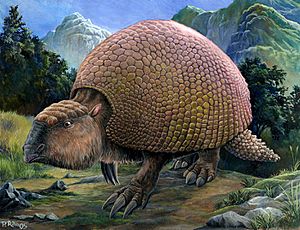 Teeth resembled those of an armadillo, but were fluted on each side by deep grooves. 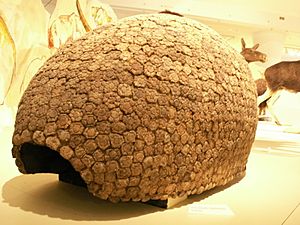 It was covered by a protective shell composed of more than 1,000 2.5 cm-thick bony plates, called osteoderms or scutes.

Each species of glyptodont had its own unique osteoderm pattern and shell type. With this protection, they were armored like turtles. Unlike most turtles, glyptodonts could not withdraw their heads, but instead had a bony cap on the top of their skull. Even the tail of Glyptodon had a ring of bones for protection. Such a massive shell needed considerable support, evidenced by features such as fused vertebrae, short but massive limbs, and a broad shoulder girdle. 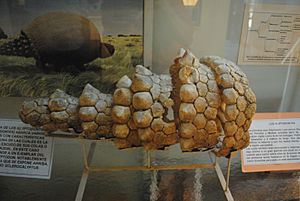 Armor at end of tail

Glyptodon clavipes had a tail covered in free bony rings of dermal structures that made for a strong, flexible, and mobile appendix. This enabled it to use the muscles along its tail to powerfully swing it.

Glyptodon may have used their tails in competition for resources and also as an ornament when competing for partners.

Xenarthrans most likely only used vision at night, during twilight, and while in burrows. However, the understory of South America's rainforests may have been dark enough during the day to facilitate limited vision for species that dwelled there. Extinct glyptodonts' tough carapace and large body size might have compensated for their inability to see approaching predators. 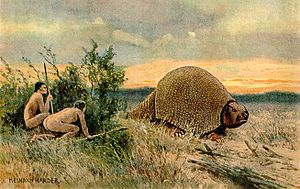 Glyptodon may have been preyed upon by animals such as the saber-toothed cats Smilodon and Homotherium, the giant short-faced bear Arctotherium, dire wolves and terror birds.

The evidence for predation on glyptodonts by humans is very scarce, limited to a Pliocene skull (Glyptotherium) in North America and some latest Pleistocene-early Holocene specimens in South America, with signs of human consumption.

Some evidence suggests that humans drove glyptodonts to extinction. Hunters may have used the shells of dead animals as shelters in inclement weather.

All content from Kiddle encyclopedia articles (including the article images and facts) can be freely used under Attribution-ShareAlike license, unless stated otherwise. Cite this article:
Glyptodon Facts for Kids. Kiddle Encyclopedia.