Archosaurs are a large group of reptiles, including all crocodiles, birds, dinosaurs, and pterosaurs (flying reptiles). There are also a number of smaller extinct groups, mostly from the Triassic period.

The Archosaurs are definitely a monophyletic clade, and do not include reptiles such as the Squamata (lizards and snakes) and the Sphenodontia (Sphenodon).

They have these diagnostic features, called synapomorphies in cladistics talk:

The archosaurs or their immediate ancestors survived the catastrophic Permian–Triassic extinction event. Then, in the early and middle Triassic, there was rapid evolution into the types of land reptile which dominated the rest of the Mesozoic era. 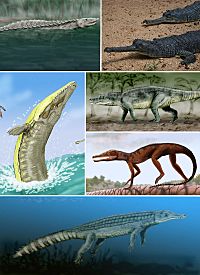 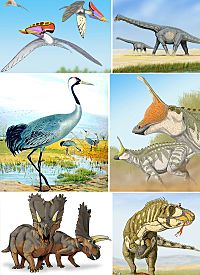 Since the 1970s, scientists have classified archosaurs mainly on the basis of their ankles. The earliest archosaurs had "primitive mesotarsal" ankles: the astragalus and calcaneum were fixed to the tibia and fibula by sutures and the joint bent about the contact between these bones and the foot.

The Pseudosuchia appeared early in the Triassic. In their ankles, the astragalus was joined to the tibia by a suture and the joint rotated round a peg on the astragalus which fitted into a socket in the calcaneum. Early "crurotarsans" still walked with sprawling limbs, but some later crurotarsans developed fully erect limbs (most notably the Rauisuchia). Modern crocodilians are crurotarsans that can walk with their limbs sprawling or erect depending on speed of locomotion.

Euparkeria and the Ornithosuchidae had "reversed crurotarsal" ankles, with a peg on the calcaneum and socket on the astragalus.

The earliest fossils of Avemetatarsalia ("bird ankles") appear in the Carnian age of the late Triassic, but it is hard to see how they could have evolved from crurotarsans — possibly they actually evolved much earlier, or perhaps they evolved from the last of the "primitive mesotarsal" archosaurs. Ornithodires' "advanced mesotarsal" ankle had a very large astragalus and very small calcaneum, and could only move in one plane, like a simple hinge. This arrangement, which was only suitable for animals with erect limbs, provided more stability when the animals were running. The ornithodires differed from other archosaurs in other ways: they were lightly built and usually small, their necks were long and had an S-shaped curve, their skulls were much more lightly built, and many ornithodires were completely bipedal. The archosaurian fourth trochanter on the femur may have made it easier for ornithodires to become bipeds, because it provided more leverage for the thigh muscles. In the late Triassic, the ornithodires diversified to produce dinosaurs and pterosaurs.

In 1988, paleontologists Michael Benton and J.M. Clark produced a new tree in a phylogenetic study of basal archosaurs. As in Gauthier's tree, Benton and Clark's revealed a basal split within Archosauria. They referred to the two groups as Crocodylotarsi and Ornithosuchia. Crocodylotarsi was defined as an apomorphy-based taxon based on the presence of a "crocodile-normal" ankle joint (considered to be the defining apomorphy of the clade). Gauthier's Pseudosuchia, by contrast, was a stem-based taxon. Unlike Gauthier's tree, Benton and Clark's places Euparkeria outside Ornithosuchia and outside the crown group Archosauria altogether.

The clades Crurotarsi and Ornithodira were first used together in 1990 by paleontologist Paul Sereno and A.B. Arcucci in their phylogenetic study of archosaurs. They were the first to erect the clade Crurotarsi, while Ornithodira was named by Gauthier in 1986. Crurotarsi and Ornithodira replaced Pseudosuchia and Ornithosuchia, respectively, as the monophyly of both of these clades were questioned. Sereno and Arcucci incorporated archosaur features other than ankle types in their analyses, which resulted in a different tree than previous analyses. Below is a cladogram based on Sereno (1991), which is similar to the one produced by Sereno and Arcucci:

In Sterling Nesbitt's 2011 monograph on early archosaurs, a phylogenetic analysis found strong support for phytosaurs falling outside Archosauria. Many subsequent studies supported this phylogeny. Because Crurotarsi is defined by the inclusion of phytosaurs, the placement of phytosaurs outside Archosauria means that Crurotarsi must include all of Archosauria. Nesbitt reinstated Pseudosuchia as a clade name for crocodile-line archosaurs, using it as a stem-based taxon. Below is a cladogram modified from Nesbitt (2011):

All content from Kiddle encyclopedia articles (including the article images and facts) can be freely used under Attribution-ShareAlike license, unless stated otherwise. Cite this article:
Archosaur Facts for Kids. Kiddle Encyclopedia.