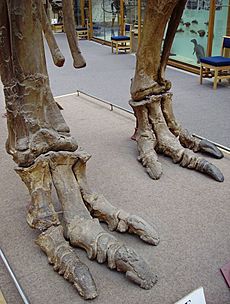 Ornithopods are the infraorder of bird-hipped dinosaurs. They started out as small, bipedal running grazers, and grew in size and numbers until they became one of the most successful groups of herbivores in the Cretaceous world.

Their major evolutionary advantage was the progressive development of a chewing apparatus that became the most sophisticated ever developed by a reptile. They had beaks, multiple teeth rows, cheek pouches and true chewing. Efficient chewing means faster digestion, as the material is broken into smaller pieces.

They reached their apex in the duck-bills, before they were wiped out by the Cretaceous–Tertiary extinction event with all other non-avian dinosaurs. Members are known from all seven continents, although the Antarctic remains are unnamed, and they are generally rare in the Southern Hemisphere.

They are the sister group to the horned dinosaurs (Ceratopsia) and the hard-headed dinosaurs (Pachycephalosauria).

The ornithopods became one of the most successful groups of herbivores in the Cretaceous world, and dominated the landscape. They started out as small, bipedal running browsers, and grew in size and numbers. Hypsilophodon from the Lower Cretaceous of the Isle of Wight, England, is a typical example. As they grew in size, they could move on four legs but still kept the habit of standing up on their hind legs when needed to reach food or perhaps to defend themselves or to run.

Sizes of the largest ornithopods

The early ornithopods were only about 1 metre (3 feet) long, but probably very fast. They had a stiff tail, like the theropods, to help them balance as they ran on their hind legs. Later ornithopods became more adapted to grazing on all fours; their spines curved, and came to resemble the spines of modern ground-feeders like the bison. As they became more adapted to eating while bent over, they became semi-quadrupedal; still running on two legs, and comfortable reaching up into trees; but spending most of their time walking or grazing while on all fours.

Later ornithopods became larger, but never reached the huge size of the long-necked, long-tailed sauropods which they largely replaced. The largest, like Shantungosaurus, were as heavy as medium sized sauropods, but never grew much beyond 15 metres (50 feet). 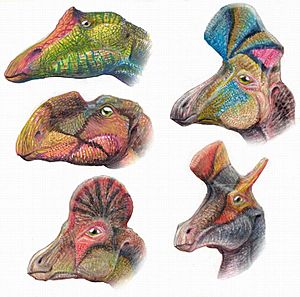 Artist's impression of several species of iguanodontians, in profile.

All content from Kiddle encyclopedia articles (including the article images and facts) can be freely used under Attribution-ShareAlike license, unless stated otherwise. Cite this article:
Ornithopod Facts for Kids. Kiddle Encyclopedia.