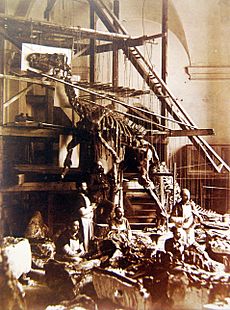 A Bernissart Iguanodon skeleton being mounted 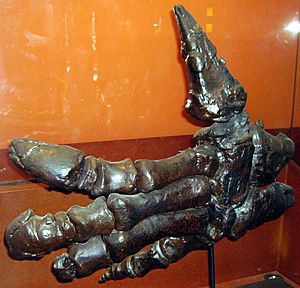 A formidable weapon: the Ignuanodon's thumb. 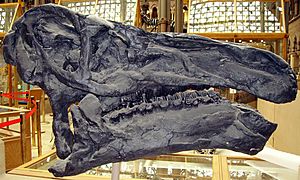 Iguanodon skull from the Oxford University Museum of Natural History

Iguanodon is a genus of ornithopod dinosaur from the Lower Cretaceous period in Europe, North America, Africa and Asia. It lived 125/126 million years ago (mya).

Discovered in 1822 and described three years later by English geologist Gideon Mantell, Iguanodon was the second dinosaur formally named, after Megalosaurus. Together with Megalosaurus and Hylaeosaurus, it was one of the three genera originally used to define Dinosauria.

A large, bulky herbivore, Iguanodon is thought by some to be in the same family as the duck-billed hadrosaurs. The taxonomy of the genus continues to be a topic of study as new species are named or long-standing ones reassigned to other genera.

Scientific understanding of Iguanodon has evolved over time. New information is got from the fossils. Researchers have made informed hypotheses about the living animal, including feeding, movement, and social behaviour. As one of the first scientifically known dinosaurs, Iguanodon has a small but notable place in the public's perception of dinosaurs. Its artistic representation changed after new interpretations of its remains.

There are at least two species recognised:

Because its front limbs were shorter than the hindlimbs, Mantell guessed it could move on two legs, as opposed to Owen, who thought it was quadrupedal. As it happens, it probably used both modes. Slow walking would be done on all fours, and faster running on the hind legs. Either way, the position of the body would be more horizontal than upright, with the tail held above the ground by its ossified (bony) ligaments (they can be clearly seen on the skeleton). It would defend itself against predators on its hind legs, using its strong front arms and dagger-like thumbs as weapons.

The teeth were close-set grinding teeth suitable for a browser. it is believed that, as with most other ornithischians, Iguanodon had some sort of cheek-like structure, muscular or non-muscular, to keep food in the mouth.

All content from Kiddle encyclopedia articles (including the article images and facts) can be freely used under Attribution-ShareAlike license, unless stated otherwise. Cite this article:
Iguanodon Facts for Kids. Kiddle Encyclopedia.