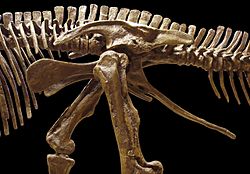 An alternative name for the order is the Predentata, because all of them are beaked herbivorous dinosaurs. The beak is in front of the jaw-bone, the dentary, so it is a 'predentary'. The upper half of the beak is the 'premaxilla' on the end of the upper jaw. The beak is a key adaptation for cropping plants for their food.

Their original (basal) form of locomotion was bipedal. However, from early in their evolutionary history, they were capable of both bipedal and quadrupedal locomotion. Several groups became entirely quadrupedal.

The ornithischia has two sub-orders:

Ornithischia is a branch-based taxon defined as all dinosaurs more closely related to Triceratops horridus than to either Passer domesticus or Saltasaurus loricatus.

The cladogram below follows a 2009 analysis. All tested members of Heterodontosauridae form a polytomy. 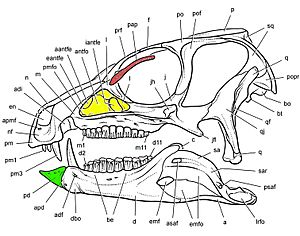 All content from Kiddle encyclopedia articles (including the article images and facts) can be freely used under Attribution-ShareAlike license, unless stated otherwise. Cite this article:
Ornithischia Facts for Kids. Kiddle Encyclopedia.