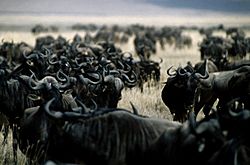 A herd of Wildebeest 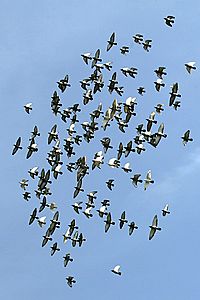 Flock of birds in flight
For other uses, see Herd (disambiguation).

In addition, special collective nouns may be used for particular cases: for example a flock of geese, if not in flight, is sometimes called a gaggle. However, in theoretical discussions in behavioural ecology, the term "herd" is used for all these kinds of assemblage. A herd may also refer to one that tends and cares for such groups (e.i. shepherds tend to sheep, and goatherds tend to goats, etc.).

When an association of animals (or, by extension, people) is described as a "herd", that means that the group tends to act together (for example, all moving in the same direction at a given time), but that this does not occur as a result of planning or co-ordination. Rather, each individual is choosing behaviour that corresponds to that of the majority of other members, possibly through imitation or possibly because all are responding to the same external circumstances.

A herd can be contrasted with a co-ordinated group where individuals have distinct roles. Many human groupings, such as an army detachments or sports teams, show such co-ordination and differentiation of roles, but so do some animal groupings such as those of eusocial insects, which are co-ordinated through pheromones and other forms of animal communication. Conversely, some human groupings may behave more like herds.

All content from Kiddle encyclopedia articles (including the article images and facts) can be freely used under Attribution-ShareAlike license, unless stated otherwise. Cite this article:
Herd Facts for Kids. Kiddle Encyclopedia.