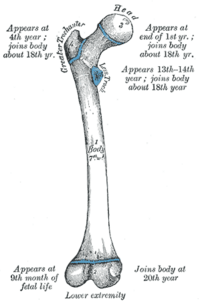 The femur is the thighbone in tetrapods. It connects to the pelvis (hip) at the upper end and to the knee at the lower end. It connects with the hip by a ball-and-socket joint which allows freedom of movement.

The lower end of the femur forms a hinge with the lower leg known as the knee. This has two 'articulations': with the patella (knee-cap), and with the tibia (the main lower leg bone).

The Femur is a leg bone in tetrapod vertebrates capable of walking or jumping, such as most land mammals, birds, many reptiles such as lizards, and amphibians such as frogs. In vertebrates with four legs such as dogs and horses, the femur is found only in the hindlimbs.

Position of femur (shown in red). Pelvis and patella are shown as semi-transparent.

The femur is the only bone in the thigh. The two femurs converge medially toward the knees, where they articulate with the proximal ends of the tibiae. The angle of convergence of the femora is a major factor in determining the femoral-tibial angle. Human females have wider pelvic bones, causing their femora to converge more than in males. In the condition genu valgum (knock knee) the femurs converge so much that the knees touch one another. The opposite extreme is genu varum (bow-leggedness). In the general population of people without either genu valgum or genu varum, the femoral-tibial angle is about 175 degrees.

The femur is the longest and, by most measures, the strongest bone in the human body. Its length on average is 26.74% of a person's height, a ratio found in both men and women and most ethnic groups with only restricted variation, and is useful in anthropology because it offers a basis for a reasonable estimate of a subject's height from an incomplete skeleton.

The femur is categorised as a long bone and comprises a diaphysis (shaft or body) and two epiphyses (extremities) that articulate with adjacent bones in the hip and knee.

All content from Kiddle encyclopedia articles (including the article images and facts) can be freely used under Attribution-ShareAlike license, unless stated otherwise. Cite this article:
Femur Facts for Kids. Kiddle Encyclopedia.