General diagram of the diapsid skull. Note the two holes in the skull behind the eye 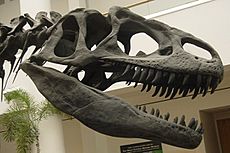 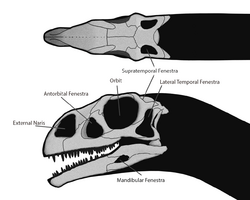 This Massospondylus skull shows the two temporal fenestrae typical of diapsids, plus the antorbital fenestra in fron of the eyes.

A diapsid is a reptile with two fenestrae (holes) behind the eye on each side of its skull. Most reptiles are diapsids, and the condition does not occur in mammals. The function of the holes is to improve jaw movements, and to reduce the weight of the skull. The holes give places for muscle attachment; also, as jaw muscles contract, the holes allow space for the muscles to bulge.

The Allosaurus skull shows the way the skull became lighter in dinosaurs, especially the large theropods. It is here not much more than a series of struts, yet provides massive bite power.

Some aquatic reptile groups lost the lower of the two openings, leaving just one behind the eye. This is called the euryapsid condition. It is fairly certain that this is secondary, and that the groups were originally diapsids. The groups include:

All content from Kiddle encyclopedia articles (including the article images and facts) can be freely used under Attribution-ShareAlike license, unless stated otherwise. Cite this article:
Diapsid Facts for Kids. Kiddle Encyclopedia.