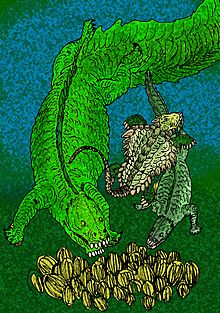 Three different genera of placodonts. They had front teeth which grabbed shellfish, and flat back teeth which crushed the shells. 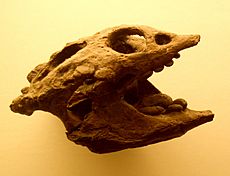 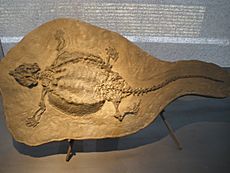 Fossil of Cyamodus shows the overall shape of the animal

Placodonts were a group of Triassic marine reptiles which had heavy flat teeth. These teeth were used for crushing shellfish. Placodonts are in the Order Sauropterygia, the group that includes Plesiosaurs. Placodonts were mostly between 1 to 2 metres (3.3 to 6.6 ft) in length, up to a maximum 3 metres (9.8 ft) long. They are found in marine sediments of the Middle and Upper Triassic, 235–250 million years ago.

The first specimen was discovered in 1830, and they have since been discovered throughout central Europe, North Africa, the Middle East and China.

The earliest forms like Placodus, which lived in the early to middle Triassic, looked rather barrel-shaped. Later placodonts had bony plates on their backs which protected their bodies while feeding.

By the Upper Triassic, these plates had grown so much that placodonts of the time such as Henodus and Placochelys looked like the sea turtles of modern day more than their ancestors. Other placodonts like Psephoderma developed plates as well, but in a different articulated manner that resembled the shells of horseshoe crabs and trilobites more than those of sea turtles. All these adaptations are examples of convergent evolution, as placodonts were not related to any of these animals.

Because of their dense bone and heavy armour plating, these creatures would have been too heavy to float in the ocean and would have used a lot of energy to reach the water surface. For this reason, and because of the type of sediment found with the fossils, it is suggested placodonts lived in shallow waters and not in deep oceans.

The placodonts ate shellfish. Their front teeth stuck out: they would be used to dig up the shellfish, and pull them from any attachment to the substrate. Inside their mouth, the teeth were large and flat: they were used to crush the shells.

"Spade-like incisors at the front, for snipping and scraping oysters from the rocks; and broad circular back teeth that acted as a pounding board to crush the shells, before the flesh was swallowed". Benton.p119

Their diet consisted of marine bivalves, brachiopods, and other invertebrates.

All content from Kiddle encyclopedia articles (including the article images and facts) can be freely used under Attribution-ShareAlike license, unless stated otherwise. Cite this article:
Placodont Facts for Kids. Kiddle Encyclopedia.