Tiny eyes can be seen. 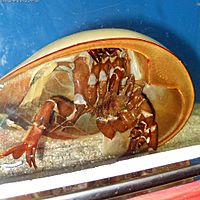 The vital organs and appendages are protected by the carapace.

The horseshoe crab or king crab is a benthic or bottom-dwelling creature. It is not a crab at all, but a relative of the arachnids. Its main habitats are coastal areas and river estuaries.

Limulus polyphemus is the best-known of the four species.

On its dome-shaped carapace, the horseshoe crab has four small eyes. It has two compound eyes at the sides of the carapace, and two simple eyes on the front.

A horseshoe crab has twelve legs: five pairs of walking legs and a set of tiny pincers. The long, spiky tail is not used as a weapon or for defense; instead, it is just used for steering and flipping the body over if it gets turned upside down.

Atlantic horseshoe crabs, Limulus polyphemus, can be found all over the eastern coast of North America and Mexico. Buried under mud or sand, they eat small clams, crustaceans, and worms. All over the coast, you will find their shells washed up on shore. Some of these shells are quite big, as the horseshoe crab can grow up to two feet long and a foot wide. Horseshoe crabs go through moults to reach that size.

The horseshoe crab population ranges from the Yucatán Peninsula to northern Maine, but they are most commonly found in the mid-Atlantic region between Virginia and New Jersey. Each major estuary along the coast has its own horseshoe crab population, distinguished from one another by size, colour and eye pigment. The females lay about 100,000 eggs.

The other three species are also called horseshoe crabs. The Japanese horseshoe crab (Tachypleus tridentatus) is found in the Seto Inland Sea, and is considered an endangered species because of loss of habitat. Two other species occur along the east coast of India: Tachypleus gigas and Carcinoscorpius rotundicauda. All four are quite similar in form and behavior.

Horseshoe crabs may be threatened by Asian overconsumption.

The horseshoe crab has an effective immune system. Its brackish maritime environment is a perfect home for bacteria. The blood of horseshoe crabs contains an enzyme that causes very rapid clotting in response to the presence of infectious bacteria. This response is used by medical and pharmaceutical companies to detect those kinds of bacteria in products, before the products are sold.

Horseshoe crabs are relatives of the Eurypterids (sea scorpions), whose first fossils appeared at the same time. They are quite ancient. They were definitely present in the early Ordovician, 450 million years ago, in a Burgess Shale-type environment. Their body shape has not changed much since then, though fossils in this group are scarce. The Atlantic horseshoe crab itself has no fossil record at all, and the genus Limulus goes back only some 20 million years, not 200 million.

Because they are famous as so-called "living fossils", the evolutionary record and the genetics of the horsehoe crabs have been studied with interest.

All content from Kiddle encyclopedia articles (including the article images and facts) can be freely used under Attribution-ShareAlike license, unless stated otherwise. Cite this article:
Horseshoe crab Facts for Kids. Kiddle Encyclopedia.