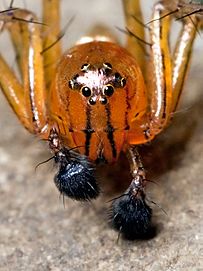 Thelyphonida, in dorsal view, with pedipalps in green

Pedipalps are the two appendages on the front of a spider's head. Some spiders seem to have ten legs and not eight, because these pedipalps look like an extra pair of legs. The pedipalps are used rather like arms. Spiders often use them to hold insects (for example crickets) for them to eat.

Male spiders also use pedipalps for mating. The male spiders make some silk, put sperm onto the silk, and then put their pedipalps into the sperm. The pedipalps then hold the sperm, and the spider can use it to mate with a female by putting them inside her epigynum.

The pedipalps of all chelicerates vary: Ricinulei, Thelyphonida, Amblypygi, some Opiliones, Schizomida, Scorpions and pseudoscorpions all have theirs as pincers, with the Amblypygi's being their entire pedipalps shaped like mantids. The Palpigradi's pedipalps have some of the strangest roles of arachnids as they use theirs for locomotion. The pedipalps of Solifugae act as antenna.

All content from Kiddle encyclopedia articles (including the article images and facts) can be freely used under Attribution-ShareAlike license, unless stated otherwise. Cite this article:
Pedipalp Facts for Kids. Kiddle Encyclopedia.