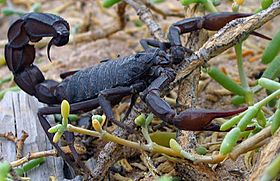 Scorpions are eight legged venomous arachnids. They have a long body with an extended tail with a sting. The average adult scorpion is about 3 inches in length. The longest scorpion is the African scorpion, which can be 9 inches long. There are about 1,750 species of scorpions worldwide.

The evolutionary history of scorpions goes back to the Ordovician, about 470 million years ago. They have adapted to a wide range of environments, and live on all continents except Antarctica. They only lived in Antarctica until about 50 Million years ago, when it became cold there. There are 13 living families. Only about 25 species have venom which can kill a human being.

They have eight legs and a pair of grasping pedipalps (like claws). The tail is narrow, with segments. It usually has a forward curve over the back, ending with a venomous stinger.

Their body is in three parts. The front section is the cephalothorax; the abdomen is called the mesosoma, and the tail is the metasoma. The body is covered by an exoskeleton which gives them good protection.

Survival in the desert

Scorpions have many ways to survive in the desert. They can slow down their metabolism. This allows them to survive on as little as one insect per year. This ability also allows them to shelter from the sun and heat for extended periods of time, using only little amounts of oxygen. Many people also believe that their claws, or pincers, were once front legs that have turned into what they now are by going through evolution. Nevertheless, the scorpions' claws play a crucial part in their hunting and mating rituals. Scorpions also possess a special, feather-like pair of organs, called pectines that they use to sense even the smallest of movements around them. This allows them to effectively track down and hunt their prey, either above or below the surface. This also warns them of possible dangers, such as other bigger hunters. The scorpion’s most feared and recognized feature is its sting. The sting contains a neurotoxin, which the scorpion uses to paralyze the victim, so it would be easier to kill and eat. They also stay hidden under rocks and that makes their body temperature cool.

The mating ritual of scorpions begins when the male and female connect claws. After this they verify that the other scorpion is of the same species, and is the opposite gender. After this, the male leads the female around until it finds a suitable spot to deposit its spermatophore. Once the male has found a suitable spot, he guides the female over it, where it enters her and fertilizes her. The mating ritual can take anywhere between 1 and 26 hours, depending on the male’s ability to find a suitable spot. Only a scorpion that has reached maturity may go through the mating ritual. A scorpion reaches maturity after it has gone through 5 to 7 moults.

Although scorpions are usually not found in large numbers in densely populated urban areas, they do regularly occur in and near human habitation in all tropical parts of the world. The lack of predators, readily available shelter, and abundance of insect prey such as crickets, cockroaches, silverfishes, and earwigs have caused scorpions to thrive in industrial and residential areas. In Brazil, the number of people stung by scorpions increased from 12,000 in 2000 to 140,000 in 2018.

All known scorpion species possess venom and use it primarily to kill or paralyze their prey so that it can be eaten. The venom consists of a collection of peptides.

In general, the venom is fast-acting, allowing for effective prey capture; however, as a general rule, scorpions kill their prey with brute force if they can, as opposed to using venom, which is also used as a defense against predators.

Of the more than one thousand known species of scorpions, only 25 have venom that is deadly to humans; most of those belong to the family Buthidae.

According to the United States National Institute for Occupational Safety and Health, these steps should be taken to prevent scorpion stings:

All content from Kiddle encyclopedia articles (including the article images and facts) can be freely used under Attribution-ShareAlike license, unless stated otherwise. Cite this article:
Scorpion Facts for Kids. Kiddle Encyclopedia.