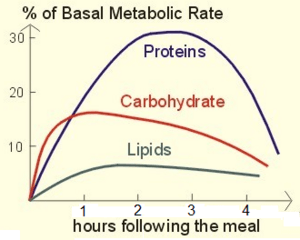 About 70% of a human's total energy use is due to the basal life processes within the organs of the body (see table). About 20% of one's energy use comes from physical activity and another 10% from the digestion of food after eating.

All of these processes require an intake of oxygen to provide energy for survival, usually from macronutrients like carbohydrates, fats, and proteins. The Krebs cycle produces energy-rich ATP molecules, and gives off carbon dioxide.

Basal metabolism is usually by far the largest component of total energy used. The release, and using, of energy in this state is sufficient only for the functioning of the vital organs, the heart, lungs, nervous system, kidneys, liver, intestine, sex organs, muscles, and skin.

For the BMR, most of the energy is consumed in maintaining fluid levels in tissues through osmosis, and only about one-tenth is consumed for mechanical work, such as digestion, heartbeat, and breathing.

What enables the Krebs cycle to perform metabolic changes to fats, carbohydrates, and proteins is energy, which can be defined as the ability or capacity to do work.

The building up process is termed anabolism. The formation of proteins from amino acids is an anabolic process.

Adenosine triphosphate (ATP) is the intermediate molecule that drives the transfer of energy used in muscle contraction. ATP is a high energy molecule because it stores large amounts of energy in the chemical bonds of the two terminal phosphate groups. The breaking of these chemical bonds in the Krebs cycle provides the energy needed for muscular contraction.

The researchers calculated that 62.3% of this variation was explained by differences in the mass (weight) minus the fat reserves. Other factors were the amount of fat (6.7%), age (1.7%), and experimental error including within-subject difference (2%). The rest of the variation (26.7%) was unexplained. 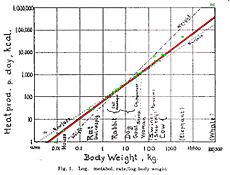 The original graph of body size versus metabolic rate hand-drawn by Max Kleiber (1947).

So there are differences in BMR even when comparing two subjects with the same lean body mass. The top 5% of people are metabolizing energy 28-32% faster than individuals with the lowest 5% BMR. For instance, one study reported an extreme case where two individuals with the same lean body mass of 43 kg had BMRs of 1075 kcal/day (4.5 MJ) and 1790 kcal/day (7.5 MJ). This difference of 715 kcal (67%) is equivalent to one of the individuals completing a 10 kilometer run every day. 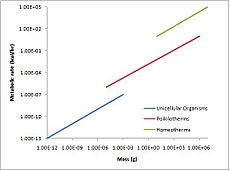 Metabolic rates vary according to animal size, and this has been discussed for over a century.

The graphs show that :

All content from Kiddle encyclopedia articles (including the article images and facts) can be freely used under Attribution-ShareAlike license, unless stated otherwise. Cite this article:
Metabolic rate Facts for Kids. Kiddle Encyclopedia.