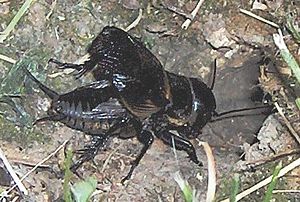 A male Gryllus cricket chirping: Its head faces its burrow; the leathery fore wings are raised (clear of the more delicate hind wings) and are being scraped against each other (stridulation) to produce the song. The burrow acts as a resonator, amplifying the sound

Stridulation is the act of producing sound by rubbing together certain body parts. This behavior is mostly associated with insects, but other animals are known to do this as well, such as a number of species of fish, snakes and spiders.

All content from Kiddle encyclopedia articles (including the article images and facts) can be freely used under Attribution-ShareAlike license, unless stated otherwise. Cite this article:
Stridulation Facts for Kids. Kiddle Encyclopedia.