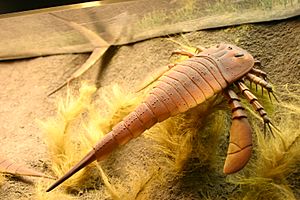 The eurypterids, related to arachnids, were the largest known arthropods. They are members of the extinct order Eurypterida. It is a most diverse Chelicerate order.

The largest, such as Jaekelopterus, reached 2½ metres in length, but most species were less than 20 cm (8 inches). They were the largest arthropods of all time. They were predators which thrived in the warm, shallow seas and lakes of the Ordovician to the Permian periods, around 460 to 248 million years ago. Recent research suggsts their eyesight was not very good.

The move from the sea to fresh water probably occurred by the Pennsylvanian period. Eurypterids went extinct during the Permian–Triassic extinction event 251 million years ago, and their fossils have a near global distribution.

The typical eurypterid had a large, flat, semicircular carapace, followed by a jointed section, and finally a tapering, flexible tail, most ending with a long spine at the end (Pterygotus, though, had a large flat tail, possibly with a smaller spine). Behind the head of the eurypterids were twelve body segments. These segments are formed by a dorsal plate, called a tergite, and a ventral plate, called a sternite. The tail, known as the telson, is spiked in most eurypterids.

A recent discovery of a new fossil species of eurypterid, Pentecopterus, has been made. It is two meters long, and lived 467 million years ago, in the Middle Ordovician period.

All content from Kiddle encyclopedia articles (including the article images and facts) can be freely used under Attribution-ShareAlike license, unless stated otherwise. Cite this article:
Eurypterid Facts for Kids. Kiddle Encyclopedia.