The Chelicerata are a sub-phylum of the Arthropods. The sub-phylum consists of only two classes: the Arachnids and the Merostomata.

The Merostomata are the extinct Eurypterids and the horseshoe crabs (Xiphosura). The horseshoe crabs are a small, ancient group which has survived relatively unchanged for millions of years. Groups like this are often called living fossils. The Arachnida is the huge and successful terrestrial (air-breathing) group of spiders and their relatives.

The chelicerates originated as marine animals. The first confirmed chelicerate fossils, the eurypterids, date from 445 million years ago in the late Ordovician period. Although only four marine species survive, all of them horseshoe crabs, there are over 77,000 species of air-breathing chelicerates, and there may be about 500,000 unidentified species.

The pycnogonids may or may not be Chelicerates. This is in dispute, as genetic evidence suggests they may be an ancient sister group to all other living arthropods. There are 1,300 species of these 'sea spiders'.

The life-style of chelicerates is largely carnivorous, or other kinds of heterotroph.

Like all arthropods, chelicerates have segmented bodies with jointed limbs, all covered in a cuticle made of chitin and proteins. The chelicerate bauplan consists of two tagmata, the prosoma and the opisthosoma, except that mites have lost a visible division between these sections. The chelicerae, which give the group its name, are the only appendages that appear before the mouth. In most sub-groups, they are modest pincers used to feed. However, spiders' chelicerae form fangs that most species use to inject venom into prey. The group has the open circulatory system typical of arthropods, in which a tube-like heart pumps blood through the hemocoel, which is the major body cavity. Marine chelicerates have gills, while the air-breathing forms generally have both book lungs and tracheae. In general, the ganglia of living chelicerates' central nervous systems fuse into large masses in the cephalothorax, but there are wide variations and this fusion is very limited in the Mesothelae, which are regarded as the oldest and most primitive group of spiders. Most chelicerates rely on modified bristles for touch and for information about vibrations, air currents, and chemical changes in their environment. The most active hunting spiders also have very acute eyesight.

Chelicerates were originally predators, but the group has diversified to use all the major feeding strategies: predation, parasitism, herbivory, scavenging and eating decaying organic matter. Although harvestmen can digest solid food, the guts of most modern chelicerates are too narrow for this, and they generally liquidize their food by grinding it with their chelicerae and pedipalps and flooding it with digestive enzymes. To conserve water, air-breathing chelicerates excrete waste as solids that are removed from their blood by Malpighian tubules, structures that also evolved independently in insects. While the marine horseshoe crabs rely on external fertilization, air-breathing chelicerates use internal but usually indirect fertilization. Predatory species generally use elaborate courtship rituals to prevent males from being eaten before they can mate. Most lay eggs that hatch as what look like miniature adults, but all scorpions and a few species of mites keep the eggs inside their bodies until the young emerge. In most chelicerate species the young have to fend for themselves, but in scorpions and some species of spider the females protect and feed their young.

Like all arthropods, chelicerates' bodies and appendages are covered with a tough cuticle made mainly of chitin and chemically hardened proteins. Since this cannot stretch, the animals must molt to grow. In other words, they grow new but still soft cuticles, then cast off the old one and wait for the new one to harden. Until the new cuticle hardens the animals are defenseless and almost immobilized.

Although the venom of a few spider and scorpion species can be very dangerous to humans, medical researchers are investigating the use of these venoms for the treatment of disorders ranging from cancer to erectile dysfunction. The medical industry also uses the blood of horseshoe crabs as a test for the presence of contaminant bacteria. Mites can cause allergies in humans, transmit several diseases to humans and their livestock, and are serious agricultural pests. 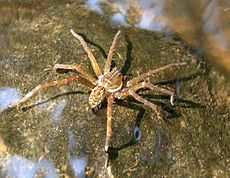 The guts of most modern chelicerates are too narrow to take solid food. All scorpions and almost all spiders are predators that "pre-process" food in preoral cavities formed by the chelicerae and the bases of the pedipalps. However, one predominantly herbivore spider species is known, and many supplement their diets with nectar and pollen. Many of the Acari (ticks and mites) are blood-sucking parasites, but there are many predatory, herbivore and scavenger sub-groups. All the Acari have a retractable feeding assembly that consists of the chelicerae, pedipalps and parts of the exoskeleton, and which forms a preoral cavity for pre-processing food.

Harvestmen are among the minority of living chelicerates that can take solid food, and the group includes predators, herbivores and scavengers. Horseshoe crabs are also capable of processing solid food, and use a distinctive feeding system. Claws at the tips of their legs grab small invertebrates and pass them to a food groove that runs from between the rearmost legs to the mouth, which is on the underside of the head and faces slightly backwards. The bases of the legs form toothed gnathobases that both grind the food and push it towards the mouth. This is how the earliest arthropods are thought to have fed.

As with other arthropods, chelicerates' cuticles would block out information about the outside world, except that they are penetrated by many sensors or connections from sensors to the nervous system. In fact, spiders and other arthropods have modified their cuticles into elaborate arrays of sensors. Various touch and vibration sensors, mostly bristles called setae, respond to different levels of force, from strong contact to very weak air currents. Chemical sensors provide equivalents of taste and smell, often by means of setae.

Living chelicerates have both compound eyes (only in horseshoe crabs, as the compound eye in the other clades has been reduced to a cluster of no more than five pairs of ocelli), mounted on the sides of the head, plus pigment-cup ocelli ("little eyes"), mounted in the middle. The eyes of horseshoe crabs can detect movement but not form images. At the other extreme, jumping spiders have a very wide field of vision, and their main eyes are ten times as acute as those of dragonflies and is able to see in both colors and UV-light.

Although well behind the insects, chelicerates are one of the most diverse groups of animals, with over 77,000 living species that have been described in scientific publications. Some estimates suggest that there may be 130,000 undescribed species of spider and nearly 500,000 undescribed species of mites and ticks. While the earliest chelicerates and the living Pycnogonida (if they are chelicerates) and Xiphosura are marine animals that breathe dissolved oxygen, the vast majority of living species are air-breathers, although a few spider species build "diving bell" webs that enable them to live under water. Like their ancestors, most living chelicerates are carnivores, mainly on small invertebrates. However, many species feed as parasites, herbivores, scavengers and detritivores. 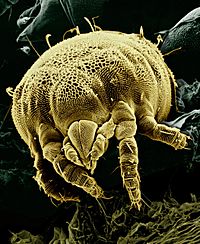 In the past, Native Americans ate the flesh of horseshoe crabs, and used the tail spines as spear tips and the shells to bail water out of their canoes. More recent attempts to use horseshoe crabs as food for livestock were abandoned when it was found that this gave the meat a bad taste. Horseshoe crab blood contains a clotting agent, limulus amebocyte lysate, which is used to test antibiotics and kidney machines to ensure that they are free of dangerous bacteria, and to detect spinal meningitis and some cancers.

Cooked tarantula spiders are considered a delicacy in Cambodia, and by the Piaroa Indians of southern Venezuela. Spider venoms may be a less polluting alternative to conventional pesticides as they are deadly to insects but the great majority are harmless to vertebrates. Possible medical uses for spider venoms are being investigated, for the treatment of cardiac arrhythmia, Alzheimer's disease, strokes, and erectile dysfunction. Because spider silk is both light and very strong, attempts are being made to produce it in goats' milk and in the leaves of plants, by means of genetic engineering.

There were about 100 reliably reported deaths from spider bites in the 20th century, compared with 1,500 from jellyfish stings.

Scorpion stings are thought to be a significant danger in less-developed countries, for example they cause about 1,000 deaths per year in Mexico, but only one every few years in the USA. Most of these incidents are caused by accidental human "invasions" of scorpion's nests. However, medical uses of scorpion venom are being investigated for treatment of brain cancers and bone diseases.

Ticks are parasitic, and some transmit micro-organisms and parasites that can cause diseases in humans, while the saliva of a few species can directly cause tick paralysis if they are not removed within a day or two.

A few of the closely related mites also infest humans, some causing intense itching by their bites and others by burrowing into the skin. Species that normally infest other animals such as rodents may infest humans if their normal hosts are eliminated. Three species of mite are a threat to honey bees and one of these, Varroa destructor, has become the largest single problem faced by beekeepers worldwide. Mites cause several forms of allergic diseases, including hay fever, asthma and eczema, and they aggravate atopic dermatitis. Mites are also significant crop pests, although predatory mites may be useful in controlling some of these.

All content from Kiddle encyclopedia articles (including the article images and facts) can be freely used under Attribution-ShareAlike license, unless stated otherwise. Cite this article:
Chelicerata Facts for Kids. Kiddle Encyclopedia.