Jumping spiders belong to the family Salticidae. These spiders catch their prey by jumping on them. Species live in many habitats, from leaves lying on the ground, to the tops of trees in the forest, and even way up on Mt. Everest. They are found on every continent in the world except for Antarctica. This family contains roughly 635 described genera and about 6080 described species, making it the largest family of spiders with about 13% of all species.

Jumping spiders have some of the best vision among arthropods and use it in courtship, hunting, and navigation. Although they normally move without attracting attention and fairly slowly, most species are capable of very agile jumps, notably when hunting, but sometimes in response to sudden threats or crossing long gaps. Jumping spiders are generally recognized by their eye pattern. All jumping spiders have four pairs of eyes, with the anterior median pair being particularly large.

They often hunt high up in bushes, or on vertical walls. To save themselves from falling they do something very much like what climbers do to protect themselves in the mountains. Humans tie a rope to the mountain and attach the other end to the harness they wear. Jumping spiders attach silk from their spinnerets to the thing on which they are standing and then they jump. While they are moving through the air they make silk so that there is always a safety rope trailing out behind them.

Jumping spiders can jump long distances for their size, as much as 16 cm.p11 When they jump, they use their hind legs. They raise their front legs to be ready to grab their prey. Many other kinds of spider hunt at night, but jumping spiders depend on their eyes, so they like to come out in the daytime. Often they will find a sunny spot on a wall or tree trunk.

Because they have very good eyes, jumping spiders can see human beings when they approach. Some of them will even jump from where they are sitting on branches, rocks, etc. onto a person's finger or camera. These spiders only bite to get something to eat or to defend themselves, so if they jump on somebody's hand they will not bite. People get bitten if they pinch or squeeze a jumping spider. 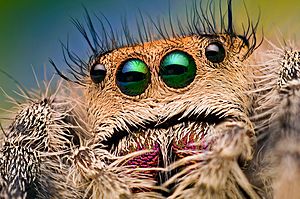 Eyes of a Female Jumping Spider

Jumping spiders are able to climb glass and other very smooth surfaces because besides having two claws on each foot they also have sticky hairs (called scopulae) that hold onto the surface. Many tiny ends on each hair are held to the glass by Van der Waals forces, the force that will make two very flat sheets of glass stick tightly together without any glue.

Jumping spiders are able to see very clearly. Two of their eight eyes are very large and are complicated inside. The eyes cannot move, so the spider will often move its body to look at what it wants to see. However, it can also move the retinas of its two main eyes on the inside of the eye, so the center of the eye's picture can be moved. So the jumping spider has binocular vision. 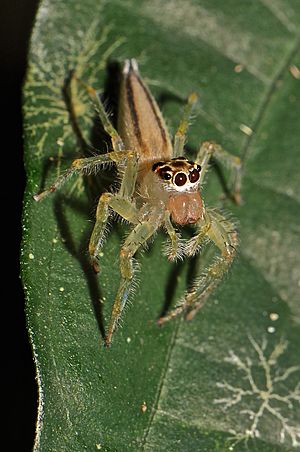 Very few kinds of jumping spider make webs; instead they use their silk for their safety rope and also to make a kind of tent where they sleep at night, shed their skins (molt), lay their eggs, and enjoy a long sleep during winter (hibernate). Their silk comes out of their spinnerets. In addition to using their silk for safety lines while jumping, they also build silken "pup tents", where they shelter from bad weather and sleep at night. They molt within these shelters, build and store egg cases within them, and also spend the winter in them.

All content from Kiddle encyclopedia articles (including the article images and facts) can be freely used under Attribution-ShareAlike license, unless stated otherwise. Cite this article:
Jumping spider Facts for Kids. Kiddle Encyclopedia.