Note the difference in the orientations of the fangs of the two spiders below, representatives of the Mygalomorphae and the Araneomorphae. 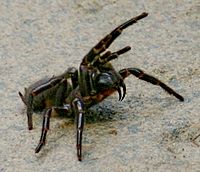 Atrax robustus (a member of the Hexathelidae) is making a threat display, and by so doing shows very clearly the orientation of its fangs, which go up and down, parallel to the long axis of the spider's body. So it is a representative of the suborder Mygalomorphae, not Araneomorphae. 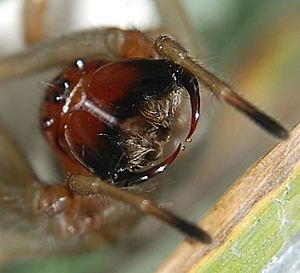 In Araneomorphae, the fangs slope towards each other, giving these spiders many more possibilities than Mygalomorphae, which can only bite top down.

Unlike Mygalomorphae, which can live for up to 25 years, most Araneomorphae die after about a year.

All content from Kiddle encyclopedia articles (including the article images and facts) can be freely used under Attribution-ShareAlike license, unless stated otherwise. Cite this article:
Araneomorphae Facts for Kids. Kiddle Encyclopedia.