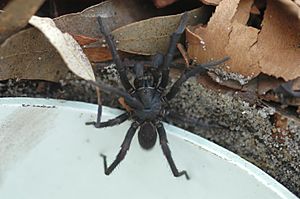 The Sydney funnel-web is medium to large in size, with body length ranging from 1 to 5 cm (0.4 to 2 in). Both sexes are glossy and darkly coloured, ranging from blue-black, to black, to brown or dark-plum coloured. The carapace covering the cephalothorax is almost hairless and appears smooth and glossy. Another characteristic are finger-like spinnerets at the end of their abdomen. The shorter-lived male is smaller than the female, but longer-legged. The average leg length for the spider in general is six to seven centimeters.

Distribution is centred on Sydney, extending north to the Central Coast and south to the Illawarra region, and west to the Blue Mountains in New South Wales.

The spider can be found in moist microhabitats, including under logs and foliage.

They typically build silk-lined tubular burrow retreats with collapsed "tunnels" or open "funnel" entrances from which irregular trip-lines radiate over the ground. In some exceptions, which lack trip-lines but may have trapdoors, the silk entrance tube may be split into two openings, in a Y or T form. The spiders burrow in sheltered habitats where they can find a moist and humid climate; for instance under rocks, logs or borer holes in rough-barked trees. The long-lived female funnel-web spend most of the time in their silk-lined tubular burrow retreats. When potential prey, which includes insects, lizards or frogs, walks across the trip-lines, they rush out, subduing their prey by injecting their venom.

Males, recognized by the modified terminal segment of the palp, tend to wander during the warmer months of the year, looking for receptive females to mate with. This makes encounters with male specimens more likely as they sometimes wander into backyards or houses, or fall into swimming pools. The spiders can survive such immersion for up to twenty-four hours, trapping air bubbles on hairs around their abdomen. Sydney funnel-web spiders are mainly active at night, as typical day-time conditions would dehydrate them. During the day, they seek cover in cool, moist hideaways. After heavy rain, spider activity is increased as their burrows may be flooded. When threatened or provoked, funnel-web spiders will display aggressive behaviour, rearing up on their hind legs and displaying their fangs. When biting, the funnel-web spider maintains a tight grip on its victim, often biting repeatedly.

The lethal dose of venom in humans is not known.

Guinness World Records has ranked the Sydney funnel-web spider as the world's most venomous spider, defining the term "most venomous" as "having the venom most toxic to humans", although it has also given this title to the Brazilian wandering spider.

Sydney funnel-web spider venom contains a compound known as δ-atracotoxin, an ion channel inhibitor, which makes the venom highly toxic for humans and other primates. However, it does not affect the nervous system of other mammals.

There is at least one recorded case of a small child dying within 15 minutes of a bite from a funnel-web.

The bite of a Sydney funnel-web is initially very painful, with clear fang marks separated by several millimetres. The size of fangs is responsible for the initial pain. In some cases the spider will remain attached until dislodged by shaking or flicking it off. Physical symptoms can include copious secretion of saliva, muscular twitching and breathing difficulty, disorientation and confusion, leading to unconsciousness.

A Sydney funnel-web bite is regarded as a medical emergency requiring immediate hospital treatment. Current guidelines for antivenom recommend two vials, or four vials if symptoms of envenomation are severe. The most vials used to treat a bite is 12. The patient was a 10-year-old boy who was bitten in February 2017 by a male Sydney funnel-web that was hiding in a shoe.

The antivenom was developed by a team headed by Struan Sutherland at the Commonwealth Serum Laboratories in Melbourne. Since the antivenom became available in 1981, there have been no recorded fatalities from Sydney funnel-web spider bites.

The Australian Reptile Park receives Sydney funnel-web spiders as part of its milking program. In January 2016, they received a male Sydney funnel-web with a 10-centimetre (4 in) leg span. The spider was described by the park as the largest specimen that it had ever seen.

All content from Kiddle encyclopedia articles (including the article images and facts) can be freely used under Attribution-ShareAlike license, unless stated otherwise. Cite this article:
Sydney funnel-web spider Facts for Kids. Kiddle Encyclopedia.