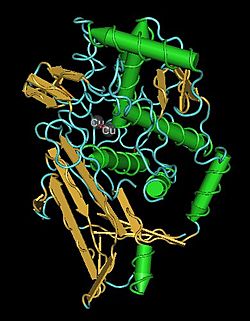 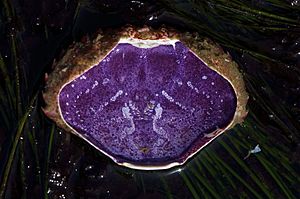 The underside of the carapace of a red rock crab (Cancer productus). The purple colour is caused by haemocyanin

Haemocyanin (or hemocyanin) is a protein which transports oxygen in the bodies of some invertebrates. Their active centre has two copper atoms which reversibly bind a single oxygen molecule (O2). Unlike the hemoglobin in red blood cells found in vertebrates, hemocyanins are not bound to blood cells. The molecules are carried in the haemolymph.

Hemocyanins are found only in the Mollusca and Arthropoda. However, the molecule is used only in a few insects. This is because insects evolved another system: the direct transfer of oxygen to tissues by a system of tubes called trachea. This delivers oxygen direct to the wing muscles and other organs.

All content from Kiddle encyclopedia articles (including the article images and facts) can be freely used under Attribution-ShareAlike license, unless stated otherwise. Cite this article:
Haemocyanin Facts for Kids. Kiddle Encyclopedia.