Massospondylus was a dinosaur from the Upper Triassic to the Lower Jurassic periods.

Although Massospondylus was long depicted as quadrupedal, a 2007 study found it to be bipedal. It was probably a plant eater (herbivore), although it is speculated that the early sauropodomorphs may have been omnivorous. This animal, which was 4–6 metres (13–20 ft) long, had a long neck and tail, with a small head and slender body. On each of its forefeet, it bore a sharp thumb claw that was used in defense or feeding. Recent studies indicate that Massospondylus grew steadily throughout its lifespan, possessed air sacs similar to those of birds, and may have cared for its young.

Massospondylus was a mid-size sauropodomorph, around 4 metres (13 ft) in length and weighed approximately 1000 kilograms (2200 lb), although a few sources have estimated its length at up to 6 metres (20 ft). It was a typical early sauropodomorph, with a slender body, a long neck and a proportionally very small head. 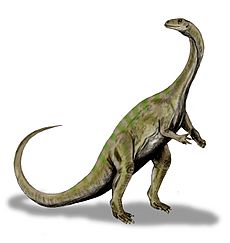 The vertebral column was composed of nine cervical (neck) vertebrae, 13 dorsal (back) vertebrae, three sacral (hip) vertebrae, and at least 40 caudal (tail) vertebrae. The pubis faced forward, as with most saurischians. It had a slighter build than that of Plateosaurus, an otherwise similar dinosaur. The neck was proportionally longer than in most other plateosaurids, with the foremost cervicals being four times the length of their width. The forelimbs were only half the length of the hindlimbs but quite powerful, as indicated by the broad upper end of the humerus that provided attachment areas for a large arm musculature. Like Plateosaurus, it had five digits on each hand and foot. The hand was short and wide, with a large sickle shaped thumb claw used for feeding or defense against predators. The thumb was the longest finger in the hand, while the fourth and fifth digits were tiny, giving the forepaws a lopsided look.

The small head of Massospondylus was approximately half the length of the femur. Numerous openings, or fenestrae, in the skull reduced its weight and provided space for muscle attachment and sensory organs. These fenestrae were present in pairs, one on each side of the skull. At the front of the skull were two large, elliptical nares, which were roughly half the size of the orbits. The orbits were proportionally larger in Massospondylus than in related genera, such as Plateosaurus. The antorbital fenestrae, smaller than those seen in Plateosaurus, were situated between the eyes and the nose. At the rear of the skull were two more pairs of temporal fenestrae: the lateral temporal fenestrae immediately behind the eye sockets, which were shaped like an inverted "T" in Massospondylus, and the supratemporal fenestrae on top of the skull. Small fenestrae also penetrated each mandible. The shape of the skull is traditionally restored as wider and shorter than that of Plateosaurus, but this appearance may be due just to differential crushing experienced by the various specimens. Some features of the skull are variable between individuals; for example, the thickness of the upper border of the orbit and the height of the posterior maxilla. These differences may be due to sexual dimorphism or individual variation. 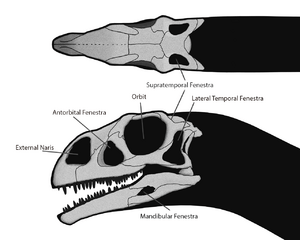 Diagram of the skull of Massospondylus, showing the various skull openings.

Tooth count is variable between individuals and increases with skull size. The premaxilla shows the constant number of four teeth per side in all known skulls; however, in the maxilla, the tooth count ranges from 14 to 22. There are 26 teeth in each side of the lower jaw in the largest known skull. The height of the teeth crowns decreases from front to back in the upper jaw, but was more or less constant in the lower jaw. The lack of pronounced tooth wear and the variable height of the crowns suggests that the teeth were replaced by succeeding new ones in relatively short time intervals. Notably, there was variation in the tooth morphology based on the position of the teeth in the jaw. The heterodonty present in Massospondylus is greater than that present in Plateosaurus, although not as pronounced as the specialization of teeth in Heterodontosaurus. Teeth closer to the front of the snout had round cross-sections and tapered to points, unlike the back teeth, which were spatulate and had oval cross-sections.

As with other early sauropodomorphs, it has been proposed that Massospondylus had cheeks. This theory was proposed because there are a few large holes for blood vessels on the surfaces of the jaw bones, unlike the numerous small holes present on the jaws of cheekless reptiles. The cheeks would have prevented food from spilling out when Massospondylus ate. Crompton and Attridge (1986) described skulls of Massospondylus as possessing pronounced overbites and suggested the presence of a horny beak on the tip of the lower jaw to make up the difference in length and account for tooth wear on the teeth at the tip of the snout. However, the difference in length may be a misinterpretation based on crushing in a top–bottom plane, and the possession of a beak is considered unlikely in recent studies.

All content from Kiddle encyclopedia articles (including the article images and facts) can be freely used under Attribution-ShareAlike license, unless stated otherwise. Cite this article:
Massospondylus Facts for Kids. Kiddle Encyclopedia.