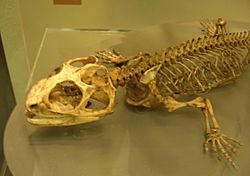 The Tuatara are reptiles which look like lizards. However, they are the only surviving member of an order of reptiles which flourished 200 million years ago.

There is now only the genus Sphenodon, with two species of Tuatara. Both are endemic to (only live in) New Zealand. Lizards and snakes are the closest living relatives of the tuatara.

Tuatara are green-brown, and measure up to 80 cm from head to the end of their tail. They have a spiny crest along the back: the Maori word tuatara refers to this. The crest is more pronounced in males. Tuatara are special in many ways. One of these is the pattern of their teeth. They have two rows of teeth in the upper jaw overlap one row on the lower jaw. This is unique among living species.

Tuatara are also unusual because they have a third 'eye'. They have two normal eyes. The third eye is on top of their head, in between their other eyes. It does not see like a normal eye. The parietal eye, as it is called, is only visible in hatchlings. They have a translucent patch at the top centre of the skull. After four to six months this becomes covered with opaque scales and pigment.

The function of the parietal eye is unknown, but it may be useful in absorbing ultraviolet rays to manufacture vitamin D. It may also do other things. Of all living tetrapods, the parietal eye is most obvious in this animal. The parietal eye is part of the pineal system. The animal's pineal gland secretes melatonin at night. Some salamanders use their pineal body to perceive polarised light, which helps navigation. Unlike lizards they have no eardrums or external male sexual organ.

Tuataras do not have ears, but they can hear. They have a number of unique features in their skeleton (bones), some of them shared through common descent with fish.

The tuatara has been classified as an endangered species since 1895. The second species, S. guntheri, was not discovered until 1989.

Tuatara, like many of New Zealand's native animals, are threatened by habitat loss and the introduced Polynesian Rat Rattus exulans. They were extinct on the mainland, with the remaining populations confined to 32 offshore islands, until the first mainland release into the heavily fenced and monitored Karori Wildlife Sanctuary in 2005.

All content from Kiddle encyclopedia articles (including the article images and facts) can be freely used under Attribution-ShareAlike license, unless stated otherwise. Cite this article:
Tuatara Facts for Kids. Kiddle Encyclopedia.