The gharial (Gavialis gangeticus), also known as the gavial or the fish-eating crocodile, is a crocodilian in the family Gavialidae and among the longest of all living crocodilians. Mature females are 2.6–4.5 m (8 ft 6 in–14 ft 9 in) long, and males 3–6 m (9 ft 10 in–19 ft 8 in). They have a distinct boss at the end of the snout, which resembles an earthenware pot known as a ghara, hence the name "gharial". The gharial is well adapted to catching fish because of its long, thin snout and 110 sharp, interlocking teeth.

The gharial probably evolved in the northern Indian subcontinent. Fossil gharial remains were excavated in Pliocene deposits in the Sivalik Hills and the Narmada River valley. It currently inhabits rivers in the plains of the northern part of the Indian subcontinent. It is the most thoroughly aquatic crocodilian, and leaves the water only for basking and building nests on moist sandbanks. Adults mate at the end of the cold season. Females congregate in spring to dig nests, in which they lay 20–95 eggs. They guard the nests and the young that hatch before the onset of the monsoon. The hatchlings stay and forage in shallow water during their first year, but move to sites with deeper water as they grow.

The wild gharial population has declined drastically since the 1930s, and is limited to only 2% of its historical range today. Conservation programmes initiated in India and Nepal focused on reintroducing captive-bred gharials since the early 1980s. Loss of habitat because of sand mining and conversion to agriculture, depletion of fish resources and detrimental fishing methods continue to threaten the population. It has been listed as critically endangered on the IUCN Red List since 2007.

The oldest known depictions of the gharial are about 4,000 years old and were found in the Indus Valley. Hindus regard it as the vehicle of the river deity Gaṅgā. Local people living near rivers attributed mystical and healing powers to the gharial, and used some of its body parts as ingredients of indigenous medicine.

Northern Indian subcontinent: Bhutan (almost extinct), Bangladesh (close to extinction), India (present in small numbers and increasing), Myanmar (possibly extinct), Nepal, Pakistan (close to extinction). Usually found in the river systems of Indus (Pakistan) and the Brahmaputra (Bangladesh, Bhutan & North eastern India), the Ganges (Bangladesh, India & Nepal), and the Mahanadi (in the rainforest biome)(India), with small numbers in Kaladan and the Ayeyarwady River in Myanmar. It is sympatric, in respective areas, with the Mugger Crocodile (Crocodylus palustris) and the Saltwater Crocodile (Crocodylus porosus).

Gharials live in rivers. They are best adapted to the calmer areas in deep fast moving rivers. Their physical attributes do not make the animals very suited to walk on land. In fact the only reasons the gharial leaves the water is to either bask in the sun or to nest on the sandbanks of the rivers.

The Gharial has a long, narrow snout. This is the feature that is most different from most other Crocodilia. The only other species who has such a snout is the False gharial (Tomistoma schlegelii), which is closely related. The shape of this snout changes when the animal grows older. The snout becomes progressively thinner the older the gharial gets. There is a bulbous growth on the tip of the male's snout. This is called a 'ghara' (after the Indian word meaning 'pot'). It is only present in mature animals. It is used for different activities, such as making a resonant hum during vocalization. It is also used for attracting females. The mating ritual includes a section where the male uses this ghara to make bubbles. 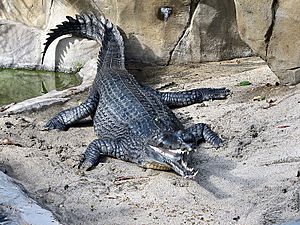 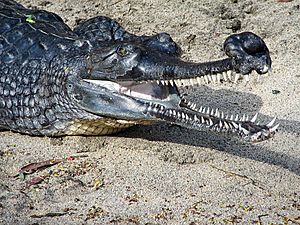 Close-up of the male's ghara.

The long jaws are lined with many interlocking, razor-sharp teeth. This is an adaptation to the diet (predominantly fish in adults). This species is one of the largest of all crocodilian species, approaching the saltwater crocodile (Crocodylus porosus) and the Nile crocodile in maximum size - males reach at least 5 metres in length, and often approach 6 metres. Reports of 7 metre animals exist, but are unconfirmed. The leg musculature of the gharial is not suited to enable the animal to raise the body off the ground (on land) in order to achieve the high-walk gait - being able only to push its body forward across the ground ('belly-sliding'), although it can do this with some speed when required. However, when in water, the gharial is the most nimble and quick of all the crocodiles in the world. The tail seems overdeveloped and is flattened on the side, more so than other crocodiles. This enables it to achieve the excellent swimming abilities.

The gharial has 27 to 29 upper and 25 or 26 lower teeth on each side. These teeth are not received into interdental pits; the first, second, and third mandibular teeth fit into notches in the upper jaw. The front teeth are the largest. The gharial's snout is narrow and long, with a dilation at the end and its nasal bones are comparatively short and are widely separated from the pre-maxillaries. The nasal opening of a gharial is smaller than the supra-temporal fossae. The gharial's lower anterior margin of orbit (jugal) is raised and its mandibular symphysis is extremely long, extending to the 23rd or 24th tooth. A dorsal shield is formed from four longitudinal series of juxtaposed, keeled and bony scutes.

The length of the snout is 3.5 (in adults) to 5.5 times (in young) the breadth of the snout's base. Nuchal and dorsal scutes form a single continuous shield composed of 21 or 22 transverse series. Gharials have an outer row of soft, smooth or feebly-keeled scutes in addition to the bony dorsal scutes. They also have two small post-occipital scutes.

The outer toes of a gharial are two-thirds webbed, while the middle toe is one-third webbed. Gharials have a strong crest on the outer edge of the forearm, leg and foot. Typically, adult gharials are of a dark olive hue while young ones are pale olive, with dark brown spots or cross-bands.

Young gharials eat insects, larvae, and small frogs. Adults feed almost only on fish, although some individuals have been known to eat dead animals. Their snout morphology is ideally suited for piscivory; their long, narrow snouts afford very little resistance to water in swiping motions to snap up fish in the water. Their numerous needle-like teeth are perfect for holding on to struggling, slippery fish.

The Gharial is not a man-eater. Despite its immense size, its thin, fragile jaws make it physically incapable of devouring any large animal, including a human being. The myth that gharials eat humans may come partly from their similar appearance to Crocodiles and because jewelry has been found in their stomachs. However, the gharial may have swallowed this jewelry while scavenging corpses or because used to aid digestion or buoyancy management. 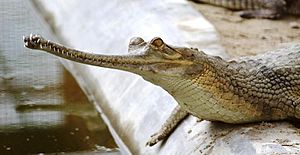 The mating season is during November through December and well into January. The nesting and laying of eggs takes place in the dry season of March, April, and May. This is because during the dry season the rivers shrink a bit and the sandy river banks are available for nesting. Between 30 and 50 eggs are deposited into the hole that the female digs up before it is covered over carefully. After about 90 days, the juveniles emerge, although there is no record of the female assisting the juveniles into the water after they hatch (probably because their jaws are not suited for carrying the young due to the needle like teeth). However the mother does protect the young in the water for a few days till they learn to fend for themselves. 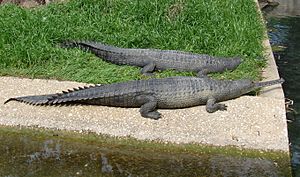 In the 1970s the gharial came to the brink of extinction and even now remains on the critically endangered list. The conservation efforts of the environmentalists in cooperation with several governments has led to some reduction in the threat of extinction. Some hope lies with the conservation and management programs in place as of 2004. Full protection was granted in the 1970s in the hope of reducing poaching losses, although these measures were slow to be implemented at first. Now there are 9 protected areas for this species in India which are linked to both captive breeding and 'ranching' operations where eggs collected from the wild are raised in captivity (to reduce mortality due to natural predators) and then released back into the wild (the first being released in 1981). More than 3000 animals have been released through these programs, and the wild population in India is estimated at around 1500 animals - with perhaps between one and two hundred animals in the remainder of its range.

Recently this species has moved from Endangered to Critically Endangered on the 2007 Red List of endangered species of animals and plants issued by the World Conservation Union, and qualifies for protection under the CITES (Convention on International Trade of Endangered Species) Appendix II.

The gharial and its extinct relatives are grouped together by taxonomists in several different ways:

Janke et al. (2005), using molecular genetic evidence, found the gharial and the false gharial (Tomistoma) to be close relatives, and placed them together in the same family.

All content from Kiddle encyclopedia articles (including the article images and facts) can be freely used under Attribution-ShareAlike license, unless stated otherwise. Cite this article:
Gharial Facts for Kids. Kiddle Encyclopedia.