The Irrawaddy River or Ayeyarwady River is a river that flows from north to south through Myanmar. It is the country's largest river and most important commercial waterway. It begins where the N'mai and Mali rivers join together. The river ends at the Andaman Sea. The drainage basin is about 404,200 square kilometres (156,100 sq mi) and covers a large part of Myanmar.

The delta of the Irrawaddy begins about 93 kilometres (58 mi) north of the city of Hinthada. The westernmost distributary of the delta is the Pathein (Bassein) River and the easternmost is the Yangon River. The land in the delta is low but it is not flat. The soil is made of fine silt.

A large number of people live in the delta region. Because the soil can be as low as 3 metres above sea level, it is an important area for growing rice.

On 2 May 2008, Cyclone Nargis was a major disaster for the delta. The cyclone reportedly killed at least 77,000 people with over 55,900 missing, and left about 2.5 million homeless.

Annual rainfall in the delta region is about 2,500 mm (100 in). Most of the rain falls during the monsoons which happen between May and November. 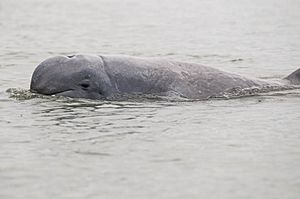 There is not a complete list of all the types of fish found along the Irrawaddy River. In 2008, it was estimated that the region is home to 119–195 species of fish found nowhere else in the world.

One of the best-known species in the river is the Irrawaddy dolphin. The dolphin is listed as a vulnerable species, meaning it is at risk to become endangered. In 2016 officials report only 62 dolphins are left in Myanmar.

There are several different ecoregions along the river.

The Irrawaddy River begins where the streams of the Nmai and Mali join. Both of these rivers begin in high and remote mountains near the border with Tibet. In this area rain falls at all seasons of the year, but mostly in the summer. The valleys and lower hill ranges are covered with an evergreen rainforest. At elevations above 900 metres (3,000 ft) there are forests of oak and pine. Above 1,800 metres (5,900 ft), are forests of rhododendrons. Above 2,400 metres (7,900 ft) there are evergreen conifer forests.

The Central Basin and Lowlands

The central basin receives little rain. The humidity is always high, which is important for plant life. The area is mostly covered in plains. The forests are mostly filled with teak. The natural habitats in this area have been changed for farming. The wildlife includes many birds, small mammals and reptiles such as the huge Burmese python.

The delta area has mangroves and freshwater swamp forests. It is an extremely fertile area. The lands of the upper and central parts of the delta are almost all used for farming, especially rice. The southern part becomes the Myanmar Coast mangroves. This area has marshes with oxbow lakes, islands, and streams.

Many types of bird are found in the delta. These include the great cormorant, Anatidae, and red junglefowl.

Large mammals include the Malayan sambar deer, Indian hog deer, and wild boar. Other large mammals have only a small number of animals in the delta region. Some species reported to be present include the leopard, Bengal tiger, crab-eating macaque, wild dog, and otters.

The saltwater crocodile can be found in the southern part of the delta. There are five species of sea turtle that are known to nest in Myanmar.

The Irrawaddy River has five major tributaries. Tributaries are rivers that flow into a larger river. The rivers joining the Irrawaddy are, from north to south: 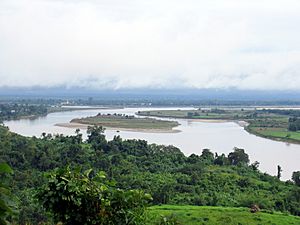 The river flows through or past the following cities:

All content from Kiddle encyclopedia articles (including the article images and facts) can be freely used under Attribution-ShareAlike license, unless stated otherwise. Cite this article:
Irrawaddy River Facts for Kids. Kiddle Encyclopedia.