Mandalay ( or Burmese: မန္တလေး; MLCTS: manta.le:) is a city in Myanmar. There is only one city in Myanmar that has more people than Mandalay. It is 716 km (445 mi) north of Yangon. Mandalay is on the east side of the Irrawaddy River. In 2014, there were 1,225,553 people living there.

The original name of the city was Yadanabon (ရတနာပုံ). This name came from the Pali word Ratanapūra (ရတနပူရ). "Ratanapūra" means "City of Gems." The city also had another name: Lay Kyun Aung Myei (လေးကျွန်းအောင်မြေ). This means "Victorious Land over the Four Islands." 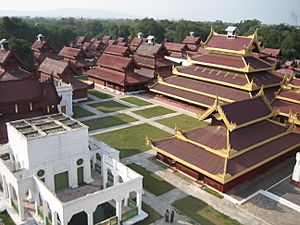 Mandalay was started by King Mindon. He started the city on 13 February 1857. He built Mandalay as the new capital city of the Kingdom of Burma.

A tower in the Mandalay Palace walls.

The king also built some other buildings in the city. These buildings were the Kuthodaw Pagoda, the Pahtan-haw Shwe Thein upasampada hall, the Thudamma "Good Dharma" zayats, and a library for the Pāli Canon. A zayat is a building where Buddhism is taught.

Mandalay was the capital for 26 years. It was the last royal capital of the Konbaung Dynasty. (The Konbaung Dynasty were the last rulers of the Kingdom of Burma before it was taken over by the British Empire.) On 28 November 1885, the British conquered Burma. This ended the Third Anglo-Burmese War. King Thibaw Min and Queen Supayalat were sent into exile. 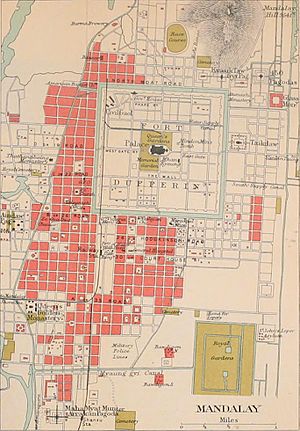 Mandalay was still an important city in British Burma. The city of Rangoon became the capital of Burma.

The British wanted to make Mandalay an important commercial city. They did not want it to be important for politics, education, or other reasons. Mandalay was connected to Yangon by railroad in 1889. The first college in Mandalay wasn't built until 1925.

The royal palace was looted by the British. All of the treasures were stolen. Some treasures can be seen in the Victoria and Albert Museum. The British changed the name of the palace to Fort Dufferin. British soldiers used the palace as a barracks (a place to camp.) 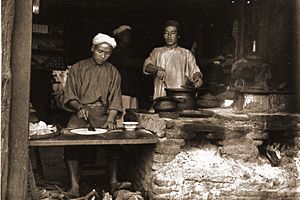 A street scene in Mandalay during British colonial times. This street is in Mandalay's Chinatown neighborhood.

During the time the British were in charge, many people moved to Mandalay from India. (India was also a British colony.) From 1904 to 1905, a plague happened. About one third of the people of Mandalay left to get away from the disease.

During World War II, Mandalay was bombed by the Japanese. The British moved all of their airplanes to India. Mandalay had no defenses against the Japanese air raids. On 3 April 1942, the Imperial Japanese Army Air Service bombed the city. Three-fifths (3/5) of the houses were destroyed. More than 2,000 civilians (people who are not military) were killed.

The Japanese soon invaded Burma. The Imperial Japanese Army took over the city of Mandalay. They were in charge from May 1942 until March 1945. The palace citadel was made into a supply depot. (A supply depot is a building that stores supplies like food and machines.)

The Allied forces bombed the city after the Japanese took it over. Much of the palace was destroyed. Only the royal mint and watch tower were not destroyed. The palace was rebuild in the 1990s.

In 1948, the British left Burma. Mandalay was still the most important city for culture, education, and commerce in Upper Burma.

Until the 1990s, most students went to university in Mandalay. Until 1991, there were only three universities in Upper Burma: Mandalay University, The University of Medicine, Mandalay, and the Defense Services Academy. All of these universities are in Mandalay. Only some other cities had schools called "Degree Colleges." These were small schools that were part of Mandalay University. These colleges had classes in a small number of subjects.

From 1962 to 1988, Ne Win was in charge of the government. He was very isolationist. This means that he did not want Myanmar to be part of global trade or tourism. In the 1980s, Mandalay was the second biggest city in Myanmar. It looked like a town with low buildings, dusty streets, and more bicycles than cars. 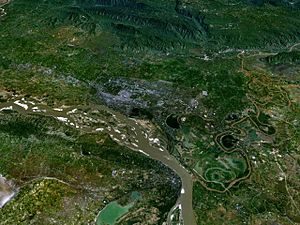 Fires are still a big problem. In February 2008, there was another big fire in Mandalay. It destroyed the Yadanabon Market. This was the second-biggest market in the city. In February 2009, a fire destroyed 320 houses. More than 1,600 people were made homeless.

The Chinese have rebuilt the parts of the city that burned down. They built apartment buildings, hotels, and shopping centers. They helped make Mandalay again an important city for trade and commerce. It now connects trade for Upper Burma, Lower Burma, China, and India.

Mandalay has grown much bigger over time. It now includes what used to be Amarapura. (Amarapura was where King Mindon's capital city used to be before he moved it to Mandalay.) Mandalay celebrated its 150th birthday on 15 May 2009 at 4:31:36 am.

There are many important places and buildings in Mandalay. 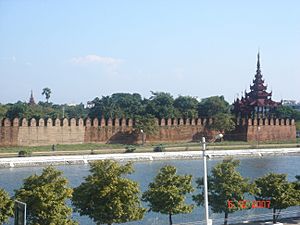 The royal palace in Mandalay is a very important building. A lot of it was burned down during World War II. The royal mint and watch tower did not burn down. The rest of the buildings were rebuilt.

Today the palace is an important symbol of Mandalay. Many tourists and visitors come to see it. 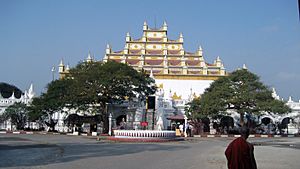 The Atumashi Monastery was built again after it burned down.

The Atumashi Monastery is a Buddhist monastery. A monastery is a building where monks (holy men) live, work, and pray. This place is a kyaung, a special kind of monastery. The name means "inimitable vihara."

The monastery burned down in 1890. Only the plinth (bottom platform) did not burn. The government decided to rebuild the monastery. They started building on 2 May 1995. It was finished being built in June of 1996. 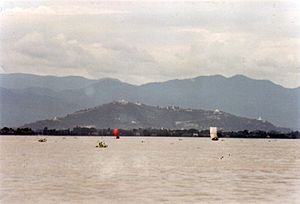 There are many important religious places on Mandalay Hill.

Mandalay Hill is a big hill in Mandalay. It is a holy hill. There is a legend about the hill. The Buddha visited the hill and made a prophecy. He said that some day a great city would be built at the bottom of the hill.

The hill is 230 metres (750 ft) tall. There is a road to the top. There are many temples, monasteries, and pagodas built on the hill. 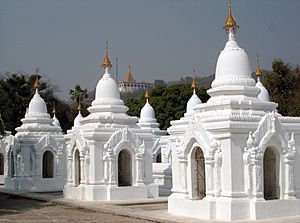 The Kuthodaw Pagoda is a very large pagoda. It was built by King Mindon in 1857. It was designed to look like the Shwezigon Pagoda in Nyaung U.

There are 729 rocks around the pagoda. Each rock is smooth and has writing on it. The writing are the words of the Tipiṭaka. (The Tipiṭaka are the Buhhdist holy books.) These stone rocks are the "world's largest book."

Buddhists believe that the statue is alive because of this. They call it the Mahamuni Sacred Living Image. This makes the Mahamuni Temple the most holy pagoda in Mandalay. 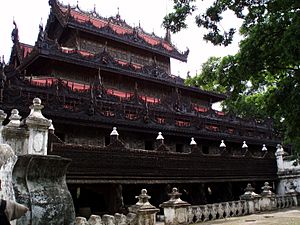 Near the bottom of Mandalay Hill is the Kyauktawgyi Pagoda. It was built by King Mindon from 1853 to 1878. It was carved out of one big block of marble. Around it are 80 arahants.

The Yadanabon Zoological Garden is a small zoo in Mandalay. It is in between the palace and Mandalay Hill. It is the only zoo in the world that has Burmese roofed turtles.

The Shwenandaw Monastery (Burmese: ရွှေနန်းတော်ကျောင်း; MLCTS: hrwe. nan: taw kyaung: lit. "Golden Palace Monastery") is an important Buddhist monastery. It was built by King Thibaw Min in 1880. It is made from teak, a kind of wood. Inside of it are many carvings on the walls and roofs. The carvings show Buddhist myths.

Mandalay is in the country of Myanmar. It is by the side of the Irrawaddy river. Its coordinates are 21.98° North, 96.08° East.

A lot of earthquakes happen on tectonic faults. The biggest earthquake in Mandalay happened in 1956. That one was a magnitude 7 earthquake. That earthquake did a lot more damage to the city of Sagaing, which is nearby. It is now called the "Great Sagaing Quake."

There are some important books and poems that talk about Mandalay. Some of these are famous.

Rudyard Kipling wrote a poem called "Mandalay." He wrote it in 1890. This poem has a famous saying in it: "on the road to Mandalay."

In 1907, Oley Speaks wrote a song using the words of the poem. He called the song "On the Road to Mandalay." The song is very famous. Frank Sinatra sang the song and called it Come Fly with Me.

George Orwell wrote a novel called Burmese Days. He wrote it in 1934. Orwell was part of the Indian Imperial Police. He was stationed in Mandalay. The novel is about his experiences (what he did and saw.) He also wrote some non-fiction essays and short stories. Some of these are "A Hanging" (1931) and "Shooting an Elephant" (1936).

All content from Kiddle encyclopedia articles (including the article images and facts) can be freely used under Attribution-ShareAlike license, unless stated otherwise. Cite this article:
Mandalay Facts for Kids. Kiddle Encyclopedia.