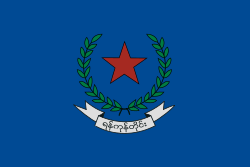 Yangon, also known as Rangoon, is the largest city in Myanmar. It was also the capital city until 2006. The city is by a river called Hlaingthayar, and is close to the sea. Yangon has more than 4 million people living there.

Yangon was founded as Dagon in the 6th century AD by the Mons, who ruled Lower Burma at that time. Dagon was a small fishing village centered about the Shwedagon Pagoda. In 1755, King Alaungpaya conquered Dagon and renamed it "Yangon". The British captured Yangon during the First Anglo-Burmese War (1824–26) but returned it to Burma after the war. The city was destroyed by a fire in 1841.

The British took Yangon and all of Lower Burma in the Second Anglo-Burmese War of 1852, and then changed Yangon into the most important city of British Burma. The British constructed a new city on a grid plan on delta land. It was bound to the east by the Pazundaung Creek and to the south and west by the Yangon River. Yangon became the capital of all British Burma after the British had captured Upper Burma in the Third Anglo-Burmese War of 1885. By the 1890s Yangon's increasing population and commerce gave birth to prosperous residential suburbs to the north of Royal Lake (Kandawgyi) and Inya Lake. The British also established hospitals including Rangoon General Hospital and colleges including Rangoon University. Colonial Yangon, with its spacious parks and lakes and mix of modern buildings and traditional wooden architecture, was known as "the garden city of the East." By the early 20th century, Yangon had public services and infrastructure on par with London.

Before World War II, about 55% of Yangon's population of 500,000 was Indian or South Asian, and only about a third was Bamar (Burman). Karens, the Chinese, the Anglo-Burmese and others made up the rest.

After World War I, Yangon became the center of Burmese independence movement. The leftist Rangoon University students led the way. Three nationwide strikes against the British Empire in 1920, 1936 and 1938 began in Yangon. Yangon was under Japan's occupation (1942–45), and was heavily damaged during World War II. Yangon became the capital of Union of Burma on 4 January 1948 when the country regained independence from the British Empire.

All content from Kiddle encyclopedia articles (including the article images and facts) can be freely used under Attribution-ShareAlike license, unless stated otherwise. Cite this article:
Yangon Facts for Kids. Kiddle Encyclopedia.