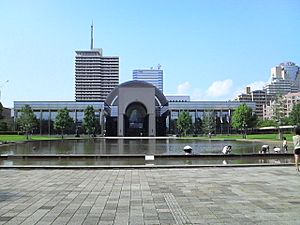 Fukuoka (福岡市code: ja is deprecated , Fukuoka-shi) is a Japanese city in Fukuoka Prefecture on the island of Kyushu. It is the capital city of the prefecture.

It has been recognized as a city designated by government ordinance since 1992.

A short distance is there from Dazaifu and the Fukuoka area to Hakata-wan (博多湾). Hakata-wan was the landing site of the Mongol invasions of Japan in 1274 and 1281.

Fukuoka is on the northwest coast of Kyushu. It is about the same distance from Tokyo as it is from Shanghai or Seoul.

Fukuoka City is divided into 7 wards.

All content from Kiddle encyclopedia articles (including the article images and facts) can be freely used under Attribution-ShareAlike license, unless stated otherwise. Cite this article:
Fukuoka, Fukuoka Facts for Kids. Kiddle Encyclopedia.