Ipoh is the capital city of the Malaysian state of Perak. Located by the Kinta River, it is nearly 180 km (110 mi) north of Kuala Lumpur and 123 km (76 mi) southeast of George Town in neighbouring Penang. As of 2010[update], Ipoh contained a population of 657,892, making it the third largest city in Malaysia by population.

Originally a village, Ipoh began to grow rapidly in the 1880s after huge deposits of tin were discovered within its vicinity. By 1895, it was the second largest town within the Federated Malay States, which also consisted of Selangor, Negeri Sembilan and Pahang. Ipoh was declared a city in 1988. However, following the depletion of its tin deposits and the collapse of tin prices in the 1970s, the city suffered decades of decline and neglect.

In recent years, Ipoh's popularity as a tourist destination has been significantly boosted by efforts to conserve its British colonial-era architecture. The city is also well-known for its cuisine and natural attractions, such as its limestone hills and caves within which Buddhist temples were built. In addition, Ipoh has managed to maintain its reputation as one of the cleanest cities in Malaysia.

Ipoh's location between Kuala Lumpur and George Town has made it a major land transportation hub within West Malaysia, with both the Malayan Railway's West Coast Line and the North-South Expressway cutting through the city. Aside from the land transportation links, Ipoh is also served by the Sultan Azlan Shah Airport.

The Great Fire of Ipoh in 1892 destroyed over half the town, but also presented an opportunity to rebuild the town in a more orderly grid pattern. Ipoh was subsequently rebuilt in time for the second tin rush and grew rapidly as a result of the booming tin mining industry, particularly in the 1920s and 1930s.

A local Hakka miner, millionaire Yau Tet Shin, started developing a large tract of the town in the early 1930s, today known as the 'New Town', from the eastern bank of the Kinta River to Greentown. In 1937, Ipoh was made the capital of Perak, replacing Taiping.

Ipoh was invaded by the Japanese on 15 December 1941. In March 1942, the Japanese Civil Administration or Perak Shu Seicho was set up at the St. Michael's Institution. After the liberation of Malaya by British forces, Ipoh remained the capital of Perak to this day.

The decline of the tin mining industry during the latter half of the 20th century caused the growth of Ipoh to stagnate. With the closure of the tin mines, its urban population was forced to seek employment in other cities within Malaysia. In spite of this, Ipoh remains one of the largest cities in Malaysia in terms of population, with tourism now a main driver of the city's economy.

Ipoh gained Municipal status in 1962, and in 1988, was declared a city by the then Sultan of Perak, Sultan Azlan Shah. 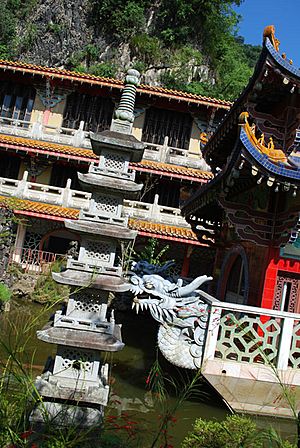 Sam Poh Tong, one of the many beautiful temples in Ipoh

Kek Lok Tong (Chinese: 極樂洞; Cavern of Utmost Happiness) is a cave temple that lies on the other side of the same hill as Sam Poh Tong. It is accessible through the Gunung Rapat housing area. It has a clean, quiet and cool environment. Other cave temples in Ipoh include Ling Sen Tong, Nan Tian Tong, Kwan Yin Tong and Perak Tong.

Limestone hills extend 20 km (12 mi) north of Ipoh and 20 km (12 mi) to the south. There are many caves in these hills; cave temples are built in some. Gua Tempurung, near Gopeng south of Ipoh, is a show cave open to the public. It is popular among spelunkers. More than 3 km (1.9 mi) long, it is one of the longest caves in Peninsula Malaysia. Part of it has been developed as a show cave with electric lighting and walkways, and there are tours of different lengths and difficulty. A fine river cave, the river passage runs about 1.6 km (0.99 mi) through the hill. There are five very large chambers and some stalactites and stalagmites.

The city is well known in Malaysia for its "Ipoh white coffee" where the coffee beans are roasted with palm-oil margarine and the resulting coffee is served with condensed milk. Ipoh is also famous for its fresh fruits such as Pomelo, Durian and Seedless Guava. In recent years Ipoh has seen an increase in international restaurants, bars and gastropubs have become popular with locals and tourists.

Ipoh was once, one of the richest cities in Malaysia as well as South East Asia back in the days when tin was king. During the 1980s when tin prices collapsed, the economy of Ipoh was hit particularly hard. However, recently the city gain some momentum. By 2017, the city will open the first Movie Animation Theme Park (MAPS), which is the first ever in South East Asia. Tourism is booming in the city, and many shops in old town Ipoh is being transform into chic café.

All content from Kiddle encyclopedia articles (including the article images and facts) can be freely used under Attribution-ShareAlike license, unless stated otherwise. Cite this article:
Ipoh Facts for Kids. Kiddle Encyclopedia.