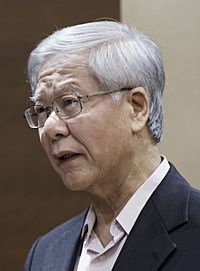 Chan Sek Keong SPMP DUT (Second Class) DUBC SC (born 5 November 1937) is a Singaporean former judge. He served as the third Chief Justice from 2006 until his retirement in 2012. He also served as Singapore's Attorney-General from 1992 to 2006.

Chan was born in Ipoh, Perak, Malaya. His family were ethnic Chinese of a Cantonese background.

All content from Kiddle encyclopedia articles (including the article images and facts) can be freely used under Attribution-ShareAlike license, unless stated otherwise. Cite this article:
Chan Sek Keong Facts for Kids. Kiddle Encyclopedia.